A very pleasant day which became a little stretched...maybe 5 to 6 kms stretched! In total 36 kms over 8 hours walking...more on why later!

During supper I learned a number of things...I had been seeing corn fields for the past few days with the corn husks still there and past their best before date. My extensive knowledge of all thing agricultural led me to think this was animal feed...bingo!

I asked Pascale about the WW1 memorials I was seeing. The war changed France forever from an agricultural farm based society as too many men were lost and those left behind could not sustain the farms. So an exodus to the cities took place and a number of villages shrunk in size or disappeared...makes sense however had never thought about this.

Pascale also mentioned that for many French people WW1 has a dark side for them. France imported many men from the French colonies be they in Africa or elsewhere. These men immediately were sent to the battlefields and often on the front lines...they were ill equipped to handle the harsh weather conditions. The bad part for Pascale is that any memorials I see will not reflect a single name for these soldiers. Some villages have made the effort however they are few and far between.

I left at 8:00 and was going at a very comfortable pace...not pushing at all. The scenery was pastoral in nature...you could have easily mistaken where I was for Saskatchewan or Manitoba except for the fact that...everyone speaks French, buildings are often 200 to 300 years old, rolling hills, small forests everywhere and many men wear berets. 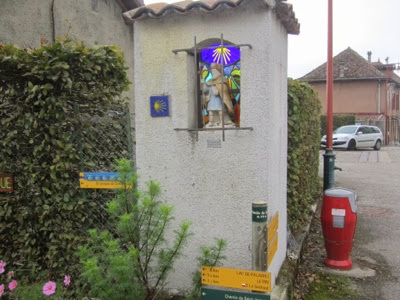 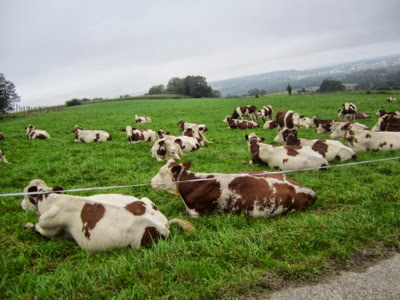 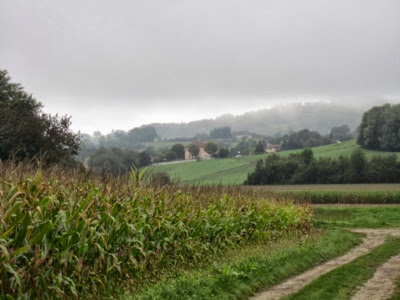 Something that I find interesting...happens wherever I have hiked and that is the alternate trail that walkers develop


Sometimes this happens around fallen trees...how many thousands of walkers over the years have taken the side path to create it...small thing but interesting for me.

All was quiet on dangerous animal front until...Siberian tiger track!!!


After nearly 5 hours of walking it was time for lunch...this time I had something that Pascale had made for me...it was not her official packed lunch but it was delicious. My daughter Claire had suggested that I take a knife, fork and spoon set...thank you Claire for suggesting this...hands would have been difficult!

While sitting down for my lunch and foot care break two pilgrims approached...Yosef and Albert

Introductions were made and Yosef and Albert immediately started taking pictures of me with them...so I took a picture of them. Both speak minimal English however I learned they are going all the way to Santiago de Compostela in two week chunks over a number of years.

I bid them goodbye as I had just started my lunch not knowing if we would meet again...left 10 minutes after them...well...30 minutes later I saw another pilgrim ahead of me as I turned the corner. He was holding his poles in his left hand and appeared to be holding a white plastic sheet in the other. Clearly he was not moving very fast and I was closing the gap...however he reached the end of a hedge and ducked right.

I assumed he was using the facilities which seem to appear just when needed however as I went past the hedge I noticed that he was laying the white sheet on the ground in the field and proceeded to lie down on it. I still didn't know that was Albert until I met Yosef a few minutes later who was in the process of heading back...he laughed as I told him his friend was having a nap (he understood this!).

I expected to be in Le Pin just before 3:00 however ended up in Le Pin around 3:45! Seems I was so entranced by my first lake in France that I missed the turn! 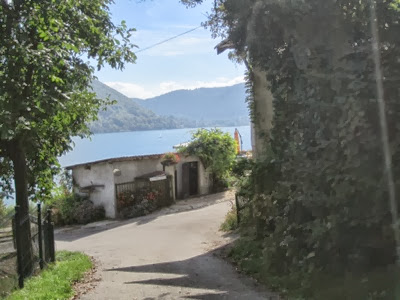 Down to the lake I went and then with some help I went back up to Le Pin...let me tell you that was a very hard and long climb back up. On the way I met an elderly gentlemen who confirmed I was heading in the right direction...one Canadian lapel pin for his help.

I found the local church and tried to recall the instructions given by Pascale this morning to Claude Rouge's Chambre d'Hotes...I almost got it right however after about 1 km of walking it just didn't feel right so back to the church I went. I then phone Mr. Rouge and learned that I had not gone far enough...sure enough another 100 meters and I would have saved myself 2 kms.

Well I made it and to my surprise there was a meeting of the local Chambre d'Hotes association with Pascal attending at Claude's place...so I handed out 7 Canadian lapel pins...had a drink of Claude's raspberry drink and crashed in my room.

Then next surprise Albert and Yosef showed up 10 minutes after me...they did not get lost! I just spent 30 minutes or so outside with them....trying to piece a conversation together. They seemed quite impressed that I can count to ten in Germany...then I really laid it on and counted to ten in Spanish.

Another high recommendation...while outside Le Pin it is very close to le Chemin St. Jacques so will save some distance tomorrow...I hope! I have a great big room and the cost is 50 euros for demi pension. I understand Claude is an artist and involved in a number of things therefore looking forward to learning more at supper tonight.