Actually I'm a little past Saint-Genix-sur-Guiers by about 1.5 km. Overall a very quiet day...did not get lost, no dangerous animals, nice weather as rain held off, no overnight ghosts and I did not meet a single St. Jacques pelerin.

I may have slipped a few dried apricots for the road as you will see later. I was the only person at breakfast and a few minutes early to boot however the nice lady had everything ready...gave her a Canadian lapel pin and started walking at 7:40.

The first 16 km or so to Saint-Maurice-de-Rotherens was almost entirely mountain trails with a fair amount of elevation gain at over 700 metres. It took me over 4.5 hours and I was often working pretty hard (read drenched in sweat). A few pictures showing how rough the trail was in sections are shown below...sure was thankful for the Vibram soles of my Merrell trail shoes. Lesser footwear would have been a problem. 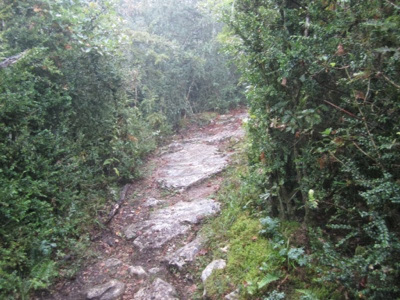 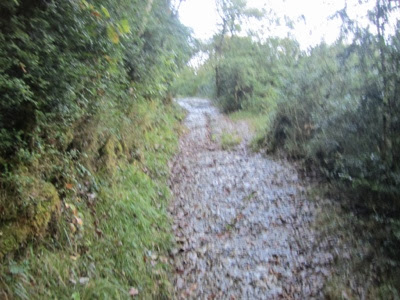 The going was quite slow at times simply because of wet conditions...I really used the trekking poles to steady myself and tried to be extra careful...all went well.

The guide books indicated that a variant trail should be followed in winter or foggy conditions. Neither applied as far I could tell so I went the regular way. Once on top the fog was pretty thick however I felt very safe sticking to the trail as it skirted the mountain ridge. Suffice to say that straying 5 to 10 feet or so to the right would not have been a good idea.

A little thank to the folks who maintain the trails...and for those little extras like cairns when the official signs are few and far between:

In Gresin I was unsure of where the trail went...a lady stopped her car and pointed out the right path. She had a young son...maybe 7 or so...gave them each a Canadian lapel pin. The look on his face...priceless.

The scenery opened up in the afternoon and the walking was once again special... 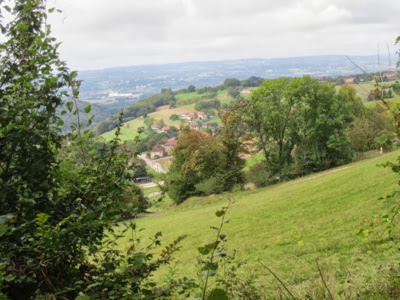 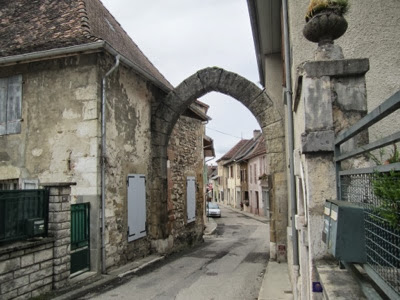 Quite late in the day I came across a stand for St. Jacques de Compostelle walkers...totally on the honour system...and they even had a pilgrim stamp for my pilgrim book.

I bought a drink and a small cake, in the shape of a shell, for 1.1 Euros...no profit there! This was a real lift and I left feeling lighter than ever..a few minutes later I had to come back and get my trekking poles!

Finally a little mystery that I would like to solve...came cross a memorial on the trail today:

Again this Chambre d'Hotes is very highly rated in my opinion. It has a room with 5 beds in it in typical gite fashion plus a very large room upstairs. The price is the same for a pelerin in either room at 40 euros for demi pension. I am lucky enough to have the upstairs room as two other pelerins have cancelled and I am the only guest.