Today was a quiet easy day...well maybe a few kms more than planned (see Future Pilgrims)...walking 22.2 kms over 5 hours or so. Great weather again...unfortunately the outlook is for steady rain for the next two days.

So far no blisters..shoulders complaining a bit however a good start!

Breakfast was later than I have been used to at 8:15...think I may have to get used to this. Not a big deal considering I had short day ahead of me.

Hot chocolate sure tasted great! After breakfast I gave Mme. Lupin, the auberge owner, 3 lapel pins as she had a few other employees. Well here is the ensuing conversation...first her daughter spent the fall semester as an exchange student in Matane Quebec. I mentioned that one of my daughters, Claire, had complete a similar exchange in Troyes France while in University...Mme Lupin was quite familiar with city of Troyes.

Mme Lupin asked me where I was from in Canada...when I told her it turns out that 3 weeks ago a couple from my home town spent 1 week at her Auberge. They were cycling in the region and it was their 12th trip to France to cycle! Scott you must make the trip!

I mentioned that two of our daughters, Lise and Jeanne, were currently working in Japan. Well last spring Mme Lupin and her husband went to Japan...told her that Dawn and I had visited Japan in the fall of 2012.

Once again the scenery was worth the walk... including a number of interesting houses. 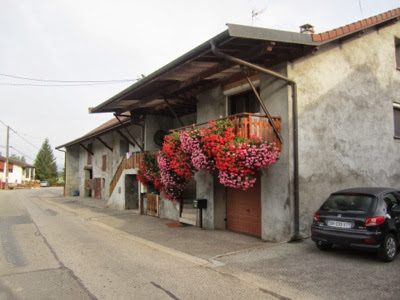 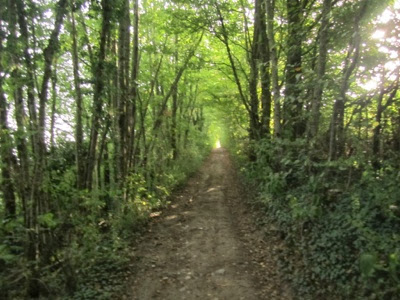 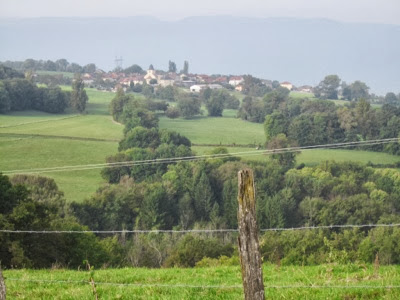 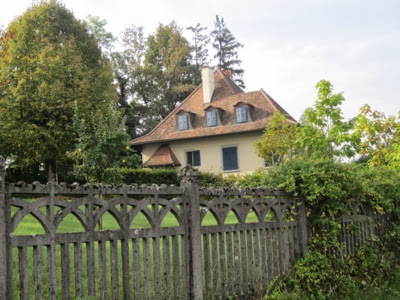 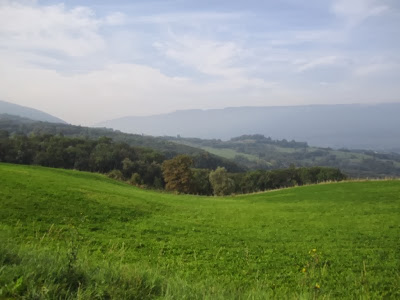 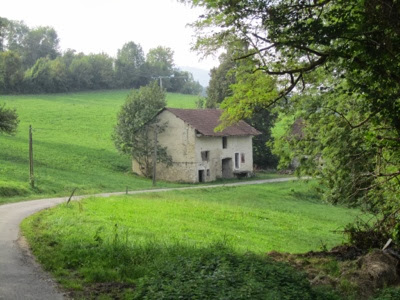 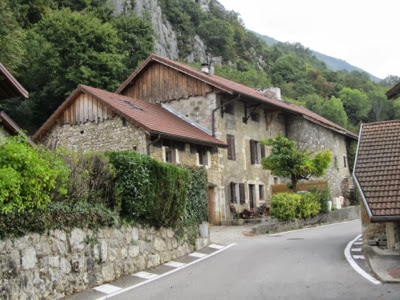 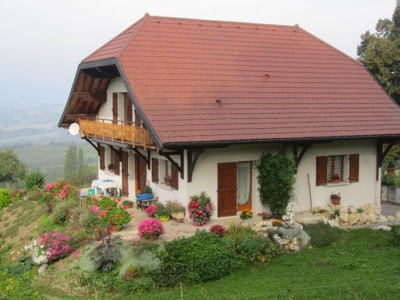 Walking was once again a mixture of forest walking and small country road walking. There was some elevation gain however I find the elevation gains so far on the Via Gebennensis to be gradual...sometimes long however not as heart pounding as the billy goat walking in the early part of the Via Jacobi in Switzerland.


I set out this morning wearing long pants as it was cool however within a very short time I was zipping off the pant legs of my North Face pants. Some of you may remember an earlier post on the Tilley pants however I think the North Face pants may well be the world's best!

As I entered a forest trail section I noticed two pilgrims ahead of me with Camino shells. I may have quickened my pace a bit to reach them...a couple from Bavaria in Germany who spoke some English. They have walked through Switzerland and are now starting the French section...they do 200 or so kms a year. The woman joked that in 2020 they would reach Santiago de Compostela. I gave her a Canadian lapel pin...he simply pointed to the one I had given and indicated all was good!

I arrived at the Auberge in Motz around 1:45...it was closed however a man saw me and then asked his wife, Monique, to open the Auberge for me. They run the Auberge which is in old historic renovated building owned by the Mairie of Motz. As soon as I entered she offered me water and some time later gave me a chunk of delicious bread....restaurant closed until 19:00.

I showed Monique a few Canadian lapel pins and asked if she had any children...turns out she had two cute young kids...girl maybe between 1 and 2 and a boy a few years later. Rather than giving them to her children herself she called them over and I handed out the pins...she explained the maple leaf and pinned them on their t-shirts...was kinda neat to see.

Of note Motz lost 4 men in World War 2...I understand that WW1 was really severe from a human loss point of view however wonder if a village like Motz had nothing left to give when WW2 was fought. I have resolved to becoming much more knowledgeable about this history when I return home.

Finally I feel I missed a golden opportunity to educate myself this morning as I passed by a Musee...

Auberge de Motz is on a variant of GR 65 after Pont du Fier. Everything about this auberge is really nice...would gladly return and spend vacation time here. Monique who runs the Auberge with her husband is really helpful and I look forward to supper tonight...demi pension 50 Euros.

I was set to not recommend the Auberge given the difficulty I had finding it, the additional 4 kms that I had not planned on and the the road walking on a well travelled road. As I mentioned this to Monique she was somewhat crestfallen...it turns out the sign for the GR65 variant has disappeared and they have been unable as of yet to have it replaced. I would have walked 2 kms in a forest rather than what I did.

Also tomorrow there is a clear way forward that will rejoin the Chemin St. Jacques without any backtracking.

Don't hesitate staying at the Auberge however make sure to ask about the route past the Pont sur Le Fier...take the forest path to the left right after the bridge...I remember seeing it well however did not know where it went!