Today was meant to be an easy day and it was as I walked 20 kms. over 4.5 hours or so. I left a little later than normal or just before 8:00 as I there was no point in getting to Beaumont too early...also slept in a bit as last night's sleep wasn't the best...noise outside, time change?

Leaving Geneva was a breeze...by far the best signage I came across in a city on my Via Jacobi walk. Going through the old part of Geneva was neat...a few photos:

People are basically honest I find...bought a croissant with ham for 3.10 Swiss Francs. I had a 20 centime coin and handed this with a 10 Swiss Franc note indicating that I did not want change for the 20 centimes as these coins are a nuisance. I was leaving with my croissant when I heard the lady yelling out for me...seems like I had forgotten my 7 Swiss Francs change!

Somewhere in Carouge I had a very slight mishap with route finding...essentially think of three sides of a triangle. I went two sides and then saw a sign that sent me back to the starting point...didn't know this at the time. Perplexed I went at this again however was standing looking at the sign when a guy on  a bike stopped and pointed out where I should be going...he received a Canadian lapel pin. It turns out the sign was reversed...either a mistake or more likely someone thought it was funny and switched the signs! At 10:30 I came across my last sign in Switzerland!


I was now officially in France... and the signage changed...

The sandwich was super with French bread, egg salad and real turkey. The cookie was from the boulangerie...short bread base (sable) with chocolate chips. It was so good I returned and bought a second one and gave the guy a Canadian lapel pin...going to have to curb buying two cookies for sure...just this once!

I arrived in Beaumont around 1:00 and decided to walk around for a short while visiting the church built in the early 1800's


Then I stopped in the local cemetery...always find this interesting. Well this time I really wasn't disappointed.

There are 51 names of men from Beaumont who were killed in the First World War...it turns out there were only 1,000 habitants on Beaumont then. The thought of this number of young men dying...essentially most of a generation I would expect is very sobering. How many more villages went through something similar?

I met Wolfgang who was sizing up where his 91 year old neighbour was to be buried...once he dies that is as apparently his neighbour is a real planner. It was a very interesting chat ranging from the pelerinage St. Jacques, current events in Syria to the fact that the current French president is incompetent...His Words!

Next came Patrick or Patrick74 as he refers to himself on the Chemin St. Jacques. It turns out Patrick is recently divorced, has three grown children and has given up on all things material...he is likely in his early 50's. He has sold his house and now lives on the Chemin St. Jacques helping various people and doing odd jobs. Last year he walked 2,500 kms. and he plans on doing this going forward. What a character...nice enough guy...hope to see him later...he of no fixed address.

Both Wolfgang and Patrick received Canadian lapel pins of course!

Back at the Fromagerie Beaumont and at time of writing this blog the only pelerin... was told by Wolfgang that this can change at a moments notice. 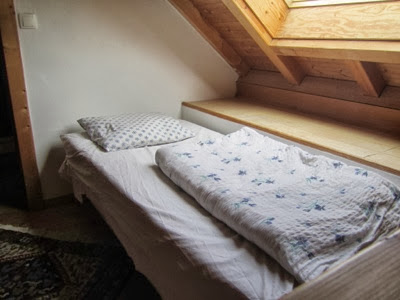 Looking forward to supper tonight...turns out Anne the owner is away and I have spaghetti to cook with sauce...as per Wolfgang who delivered the goods! Tomorrow a 27 km walk with apparently very few villages on the route. So far the route signage has been very easy to follow.

Even though I did not meet Anne (told by Wolfgang that she is a really nice lady) I am really impressed by the gite. Half pension for 35 euros is certainly worth it.