A little apprehensive about today for a few reasons...70% chance or rain, thunder showers expected, a 34 km day which should be my longest of this Camino and a requirement to be at the Clos des Capucins no later than 5pm (more on this later). Monique, the owner of the Auberge de Motz, suggested I might want to stop on Chanaz which was 18km away due to the weather...well intentioned however added to my concerns for the day.

First back to last nights supper which was superb...a little sad because some setting on the camera was off..those darn gremlins! However the menu was a salmon puff pastry, followed by a pork creole dish served with rice and white beans...completed by a chocolate mousse. Really tasty and just right quantities...this time I just waited patiently until the indication was given that supper was over.

Breakfast this morning was a small French bread baguette, a croissant and a small chocolate puff thing...again no picture! 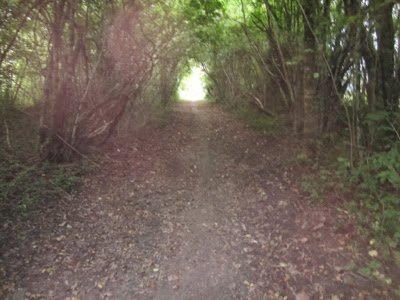 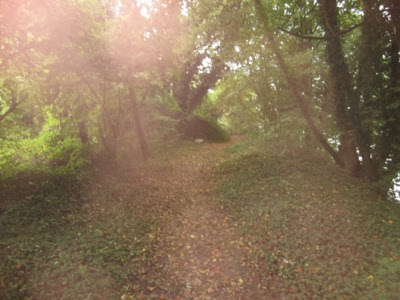 I was in the restaurant as soon as it was open and left early at 7:20...still a little dark. I felt great and decided that today was a day to push a little harder for several reasons:

The forecast was for light rain in the morning and increasing with thundershowers in the afternoon...the objective was to walk as far as possible before the rain hit...it was quite nice as I started.

I wanted to be at the Clos des Capucins as I had already cancelled in August...did not want to do this twice.

Felt good as I had a great long email from Dawn at home and a very flattering comment on my blog from Jeanne (read middle daughter!) about facial hair...always nice to hear some news from home or from anyone really!

The morning walk was forest trails, dike walking and some road walking...nice and conducive to setting a good pace.

And now the weird one...in looking at photo presentations on the Via Gebennensis on You Tube prior to the trip 3 out 6 of them showed a snake on their walk...somewhere in size between a garter and anaconda. Later in the morning I walked through some swampy type land which felt like snake country...so I just motored on by! 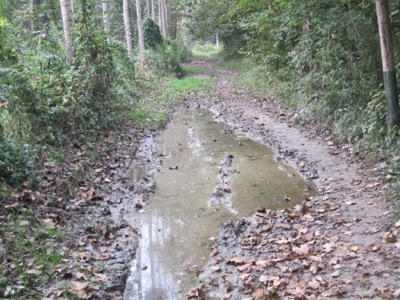 One thing for sure there is no right walking speed. For me 3 kms an hour feels really slow and is probably more for uphill walking, 4 kms an hour feels comfortable and is the speed of the estimated times set by the St. Jacques association and 5 kms an hour is city walking at a energetic clip.

For others it differs...as an example my brother Marc consistently leaves me in the dust when we hike in the mountains...no problem as we meet at key intersections. I understand that most Camino walkers  have the same issue and that often some separation between friends/couple develops during the day.

Today I expected to walk 34 km. there was an indication from the sign postings that the distance was slightly longer and my Bad Elf device registered 36.4 kms over 7.5 hrs or 4.8 kms per hour. I have no intention of repeating this effort!

Signs - a few interesting ones today...

You remember my earlier blog comment on hunting? Today is Sunday...came across two hunters. One an older guy wearing a red vest and hat with his rifle slung across his back...the other a younger guy holding his rifle nonchalantly in his hand...he had the type of dog that runs after dead ducks floating in the water.

We exchanged bonjours and I prayed that neither of them was a wanted fugitive...should have given Canadian lapel pins for safe keeping. My backpack is bright red as is the rain cover, plus I walk with sticks...I should be ok.

At around 10:30 I reached Chanaz...absolutely beautiful village...Dawn you would love this place, boulangerie with pattiseries, ice cream parlour, great street with shops along the river and river cruises.

Today was Sunday and I was not properly prepared from a food perspective...another reason to walk faster as I did not expect to eat much until Yenne. The boulangerie was open so I went in to buy a sandwich, maybe a cookie and a drink.

I had the caramel one immediately and kept the other one for later...what energy food...again Canada food guide compliant (caramel = fruit and vegetables)

The afternoon was spent mostly walking through vineyard country...really really impressive with huge expanses of hill country covered in vineyards. 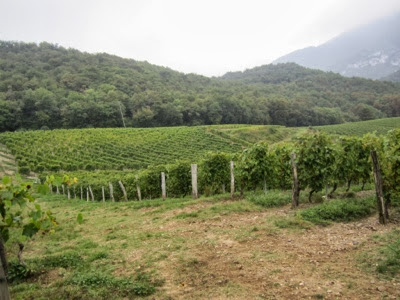 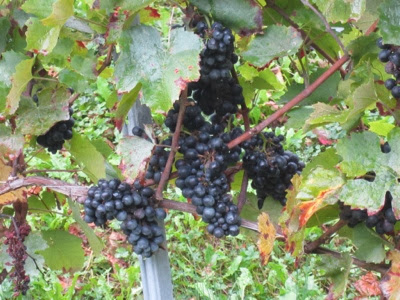 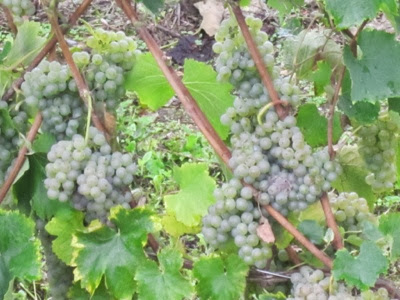 Coming out of the vineyards a good climb up to the chapel St. Roch and then a really interesting walk on top of a steep cliff and then a long descent towards Yenne.

Finally I had a request from my sister Pauline for a self portrait...so

I am now at the Clos des Capucins in Yenne...really neat place...see below.

The reason I had to be here by 5pm is that it's Sunday and I am the only guest today! Martine the head person here showed me the supper room where everything had been laid out for me!

I kept some cheese and bread for tomorrows lunch and gave 3 Canadian lapel pins to staff here...seemed quite happy to receive them. My room is quite large with in room facilities, Wifi available and breakfast tomorrow...all for 42 Euros!


The Clos des Capucins was first built in 1642 and twice in their history the Capucins monks were expelled...last time in 1903. There are 28 guest rooms.

All good...WRONG!!! Can you imagine the history here...all alone. This place must have ghosts! Can they go through locked doors? I will be sleeping with my trekking poles tonight!