A very sharp eyed reader (good friend Cal was a System Architect while pretending to work) mentioned to me that my email title referred to Thames River Walk - 2015 and not Camino Portugues...so the reason for this quick test blog is to see if I can correct this (no way to test other than post a blog entry).

Now the Thames River walk was a great one and I highly recommend it. I have many fond memories of walking with Dawn, Elaine and Dave... as to the other fellow (a good friend) called Dennis...well let’s just say his wh*n*ng was quite something. This picture says it all...time for Camino Portugues


Now Cal helped me out so my turn ...see Cal has published a couple of books (were on best seller list at McNally Robinson). Cal’s research and knowledge is really top notch (Has PHD in computer science which is on par with being an Actuary I would say).

I am the process of rereading the first book Emergence and very much enjoying the read. I also have Liberation as a Kindle edition for Camino reading.

Now this blog has 120 subscribers who receive email notification plus likely millions who simply go to the blog daily. Now let’s assume that optimistically 10 of the 120 subscribers actually read the blog entries...then those 10 tell 10 of their friends about Cal’s books and this happens for 4 more cycles...then 1,111,110 people will find out about Cal’s books (Actuaries are busy verifying this number I can guarantee!).

So many decisions to make on a long walk...which route option (never only one option on Camino routes)...how far to walk each day...where to stay...equipment...clothing etc. etc. One key set of decisions is around rain gear as there is nothing more enjoyable than walking in a steady downpour all day and finding that everything including your much anticipated change of clothes is soaking wet!

So...have a special waterproof pouch for my passport, money, cards...another one for my iPhone (iPhone 7 is water resistant which means it will be toast unprotected)...for clothing...for electronic plugs etc.

Add to this the key one rain jacket or poncho...after “in the field testing” which proved to me that a poncho is nothing more than a flying kite while trying to fit it over your head in rain I have opted for the rain jacket, matching rain pants (must always look sharp out there!), rain cover for the backpack, goretex shoes and if all else fails a garbage bag liner for the backpack.

So preparing or deciding not to prepare i.e. expecting no rain is important. After all this rain stuff adds weight...one must travel light!!!

Using my superb Google skills I found a site called www.worldweatheronline.com (sounds legit) which has the following forecast for Lisbon for the first 5 days or 122 kms of the walk.

Over the first 5 days (using Lisbon’s forecast) we have an average 83% daily expectation of rain for a total of 124.3 mm. Well that’s not too scientific and pessimistic in that Lisbon weather is assumed for the 5 days! What if the rain starts in Lisbon and moves south...then we are OK!

Looking at the forecasts for the same 5 day period and refining the locations to be actual route stops we have an average 87% daily expectation of rain for a total of 129.3 mm. Fine...perhaps the weather forecasting is simply all wrong and/or the exact path we are walking simply misses the rain i.e. catch the perfect seam I am back to where I started...

Do I take all this rain stuff or simply rely on good judgment or gut feel and leave it all behind...travel light!

Note: as explained below I am using a test version of a software app so no idea how this will look!

Well I’m off again! Very shortly, March 3rd I will be walking from Lisbon, Portugal to Santiago de Compostela, Spain...a little over 600 kms...assuming I don’t get lost!

This will be my 6th Camino route (Via Jacobi Switzerland, Via Gebennensis France, The Puy France, Frances Spain and Finisterre Spain) and 2nd time walking into Santiago de Compostela. If successful the total distance walked over these Caminos will be approximately 3,200 kms or about the same distance as walking from Winnipeg (home town) to Halifax...no way I would/could ever do that!

It’s been a year of many changes as Dawn and I made the great decision to move from Winnipeg to Toronto to be close to family...3 daughters (Lise, Jeanne, Claire) son in law (Steven) and 2 wonderful granddaughters Rose 3 years and Elodie 3 months.


We are actively and joyfully involved with Rose on a daily basis...trying madly to keep up with an inquisitive 3 year old. Elodie is smiling now and laughing at my jokes...not at me! Dawn and I are either staying young or getting old really fast...hopefully the former!

I am both excited and a little apprehensive in advance of the walk (more on this later). I never expected to walk a Camino route again however out of the blue in November 2016 my brother Marc, Cyrille (France) and I received a “let’s go” email from Paulo in Brazil.

The 4 of us previously walked from O’Cebreiro to Santiago de Compostela together (first met Cyrille in Conques France and walked with him to The Puy en Velay France). Marc and I met Paulo in the albergue in Roncesvalles...remember giving Paulo a Canadian lapel pin in the men’s washroom, meeting Paulo and fellow Brazilians for supper and Marc mentioning the next morning that Paulo had asked if we could walk together the next 3+ weeks.

Paulo had had an especially rough night as he slept on the top bunk of a champion snorer from Italy who snored on the bottom bunk. We said sure and off we went...Marc planning the route as Paulo had chosen a fairly tight schedule for himself!

It’s tough getting 4 people from 3 different countries together... unfortunately Marc and Cyrille will not be joining us... so I am afraid Paulo you are left with the 61 year old Canadian!


We will be walking the Central Route from Lisbon through Golega to Porto through Barcelos, Tui on to Santiago de Compostela. Paulo and I are taking a non traditional approach (go figure!) I created a large spreadsheet with distances, locations and possible accommodations along the route with a suggested daily walking plan. Then Paulo set to work (he can speak and understand Portuguese a little better than me...) and he booked accommodation for the walk.

We decided early that we wanted comfortable local family accommodations where possible which meant many of the places we will be staying book up fast at this time of year. We know there are risks with this approach but no matter what one chooses to do there are always risks.

We have an aggressive schedule (what else is new!) and we are planning to walk 21 days with rest days in Porto and Santiago de Compostela or an average of 29 kms per day (average of previous Camino walks) ...thankfully the Camino Portugues is quite flat!

I mentioned earlier that I was a little apprehensive... In mid December I had a little (well not so little) fall while ice skating with Rose and Steven. I had not skated in quite a long time but thought why not try a triple axle jump (had moments before successfully completed a double backwards flip). The landing did not go well...used my hand to cushion a big jolt to the rear end! Ok I tried to stop and tumbled!

Recovery has been slower than expected however feeling pretty good right now...have to trust that it will remain so for the walk!

A little story...yesterday Rose made a medical kit at pre-school (pictures below) and mid evening our doorbell rang (we live in a great basement apartment in Rose’s house and we installed a wireless door bell for Rose to ring whenever she wants to see us).

I suspect Lise and Steven had mentioned that Papi (my name instead of grand-papa...merci Cyrille) had a bobo. She came in with her medical kit in hand and proceeded to work her magical medical powers including a kiss on the cheek to make it better (facial cheek of course and not the other cheek which has been unhappy!)

With help like that how can I not be ok!!! 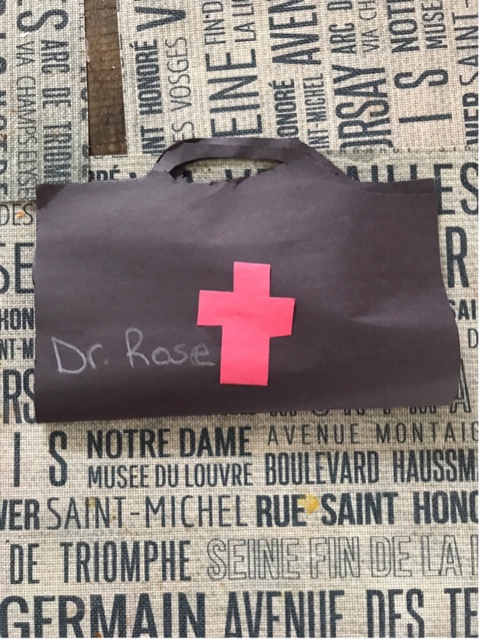 Anyone who followed my blogging on the long walk knows the technical gremlins that are always lurking. Well they are here again in what could be in a very big way.

In the past I used an app called Blogger to update the blog. Well I tried and the message received was “App developer has not updated from 32 bit to 64 bit encryption”. Now based on past experience talking to System Architects (best job in the world...draw pictures .. talk all the time...nobody understands you and you get paid mega $) like Greg and Cal I actually understood this a little bit!
So I went on various forums and finally come across an app called Blogo which seemed promising. So I tried it and got Google error 403 which of course is not understandable.

I then contacted Blogo support and they informed me that they were in the process of rewriting the API and that the Beta test version of the software would be available soon. I actually understood this jargon based on my previous life working with Systems teammates!!! “Did I want to be part of the test group when the Beta version was ready” So I said sure thinking I would never hear from them again.

Well last week I received a link to get the Beta software. What are the chances the test version will keep working? We’ll just have to wait and see...may blog intermittently instead of daily (won’t have my friend Dennis around who automatically makes for easy pickings) I can already tell there are app bugs...published date and weird picture sizes...will have to log these defects as an official tester!


Now in past Caminos I have had some very scary dangerous animals encounters. I have done the requisite research and apart from a poisonous snake or spider or two there are no expected problems in areas where people live. You will note the key phrase in areas where people live! What about the long stretches where no one lives and pilgrims pass through? Unless my geography is way off the only way to walk into Spain is to go through Northern Portugal (where Eurasian wolf roams)!


And the ever dangerous Portuguese man o’war! I will have to be extra vigilant if our walk takes us on a beach!

In final preparations...packing with a view to having a 9 kg pack if possible...no Canadian lapel pins this time!
Well that’s it for now...look forward to simply walking for hours each day and enjoying the countryside and meeting people...haven’t been in Portugal since our honeymoon in 1979.
Can’t wait to hear the Portuguese version of “Buen Camino” walking by someone on the path!