Another perfect walking day...the weather has just been unbelievable so far! Whoever was in charge of the weather for our group has done an admirable job! Everyone in the group continues to walk well and while there are definite hurts within the merry band all have held up remarkably well! We walked just over 18 km's in roughly 5.5 hours.

Tomorrow will be a rest day in Reading...including a rest day for the blog as well.

Overall some very peaceful walking, with a hill or two. The day was however highlighted by an enjoyable unplanned event, a disturbing turn and the most frightening dangerous animal encounter ever!

Last night we ate in the John Barleycorn pub...the food was delicious!

Again the day can best be shown with a few pictures...the English countryside is really beautiful! 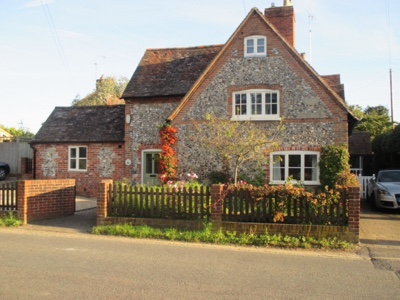 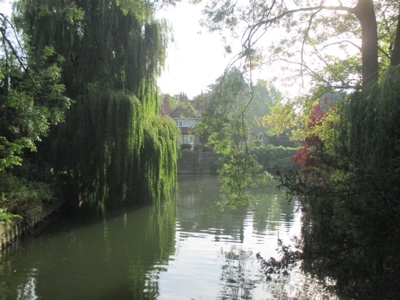 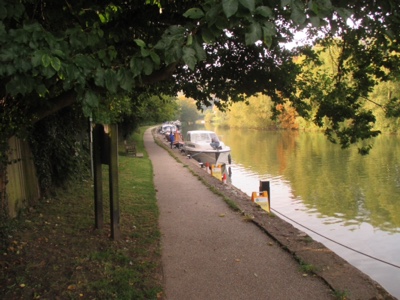 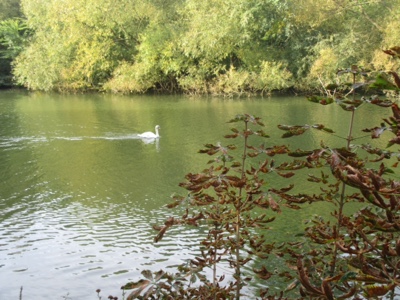 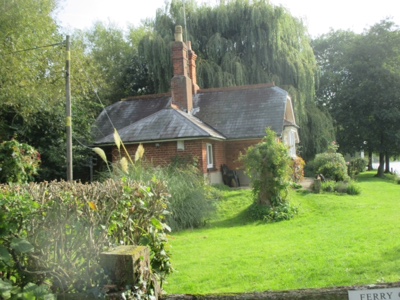 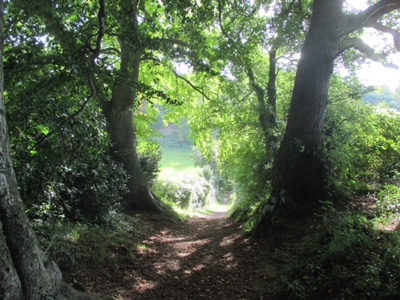 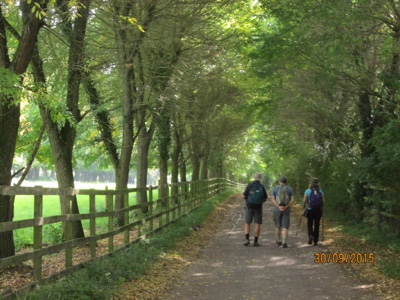 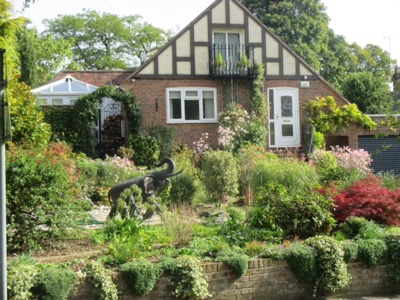 All along the Thames River you see people fishing using very long poles. Here are a few pictures concerning the popular pastime of fishing. 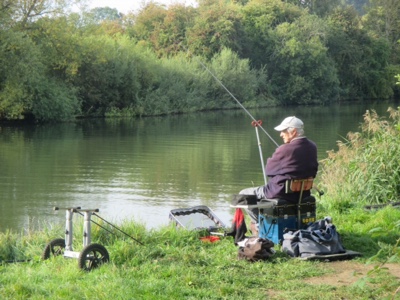 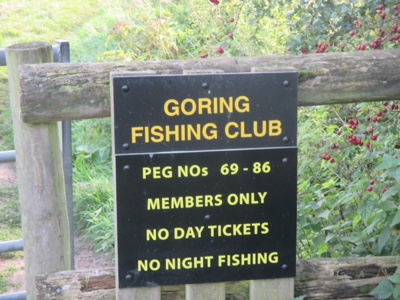 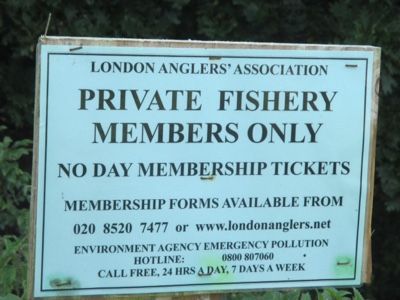 Like everything else in life it is the unplanned moments that stand out...today we had a brilliant example of this. We were just about through the village of Whitchurch-on-Thames when a lady stopped us and mentioned that we should have coffee/tea and cake just up the road.

We saw the local sign for the event and decided to stop and see what it was all about...I thought for a few minutes...Elaine suggested 30 minutes...she was right!

We paid our £2.50 each and were ushered into the small room which had numerous older ladies and a few gentlemen outside of Dave and me...Dennis I'm not sure how to refer to him. We chose our treats and sat down at a table...many folks stopping by to chat.

We found out that this was a fund raiser for the McMillan Cancer Society so all for a good cause. One lady, who seemed particularly taken by my debonair looks, wanted to sell us first raffle tickets then a whole cake followed by four cupcakes. We said we couldn't possibly carry the goods!

A gentlemen then talked to us about a 50/50 draw which required us to estimate the number of small round candies on a picture. I paid the £2 entry fee out of a disputed £10 that was not properly accounted for the previous night...as per Dennis that is!

I looked at it and said to Dave maybe 275 or so...Dave then started to analyze things more carefully by estimating the candies by small quadrant and ended up guessing 567.

We wrote down 567 and beside it "if won donate back" in the person spot on the card. I then went to use the facilities and Dave and Dennis followed...Dennis always follows. Upon coming out of the restroom a very elderly lady with a walker simply cut in front of Dave and went in the restroom...this is important!

Then when Dave was using the facilities a gentlemen called everyone together and announced the winning number 576!!! He turns to me and asks me to read out who won...I said it's me! I also added that the prize money would be  donated back to the charity and a huge cheer goes up! I am both a wizard and a hero at the same time!

Dave get's no credit at all and Dennis...well...let's say he was not involved in this effort! I am then asked to pick raffle tickets for other prizes and after a few minutes we are in our way...we chuckled about this for quite some time. That was unplanned and great fun!

Coming into a town just prior to Reading we got lost...no more signs...after backtracking and discussing with a few locals it was determined that the sign below was wrong. Someone had tampered with it as the left sign should be a right angle. This is something I have come across occasionally and I find it most frustrating!

I have been told that my dangerous animals comments are a little far fetched...I don't believe that is the case however today let there be no doubt about the danger we were in.

We were walking up a quiet country road when all of a sudden from the bush came charging out a badger...teeth barred...hissing madly and foaming at the mouth. For those who don't know a badger is one of the most tenacious and ferocious animals in the world when threatened!

Dennis tried to jump over a fence but got caught up in barb wire....Dave simply froze in fear. The badger very suddenly let out a blood curdling and chilling noise and jumped at both Dawn and Elaine who were huddled together in fear. I shudder to think what might have happened had I not picked up a loose bow and arrow lying by my side and skillfully let the arrow fly within inches of both Dawn and Elaine killing the badger.

I was really saddened to see the result of my efforts but clearly I had made the right choice. Some of you may understandably find the picture below disturbing however proof is required. I saved the day once again through a heroic act...after a few minutes we extricated Dennis from the barb wire and managed to prod Dave back to life.

Today was I my opinion the most scenic stretch of walking to date and the weather once again was sunny and warm enough to wear shorts. Everyone we meet comments on the nice walking weather...we sure have lucked out big time! We walked 14 km's in about 4 hours...a nice pace.

A real plus is that with a night's rest Elaine was good to go today and walked very well. So far everyone in the group has done extremely well...the merry band of five is in good form. The word blister has surprisingly and thankfully not appeared!

Today was a peaceful day and my blog will basically consist of pictures...no animal or ghosts today as both have taken a rest...thankfully. Kudos to Dave who noticed on the wall of the John Barleycorn Inn that we are staying in the WiFi address and password!

Last night we ate at the Queen's Head pub...all of us had the traditional Sunday supper of roast beef, Yorkshire pudding and associated vegetables. Dawn and I have taken to sharing meals considering the large portion sizes...although we did have a side order of vegetables and British onion rings to balance things off. This plus a pint of ale and a pint of water rounded things out...oh except for a superb berry, yogurt and ice cream dessert which we shared between the five of us.

This morning at breakfast at Little Gables we were in for a real treat as well...man this B&B was a delightful place...my compliments to the trip organizer...oh that would be me!


On every one of my walking adventures I come across some interesting signs...here are but a few we came across today. Also the day in pictures...an absolutely beautiful walk! 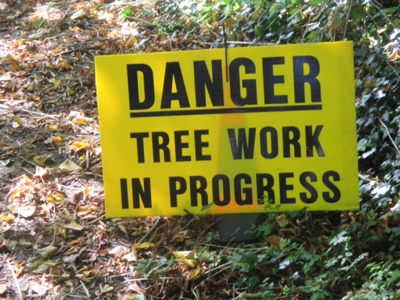 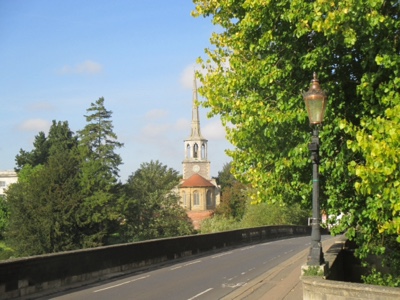 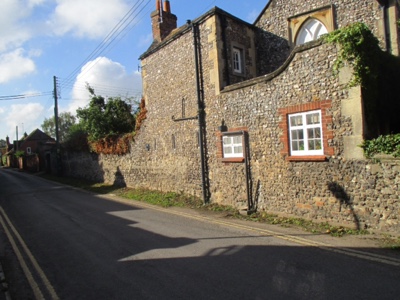 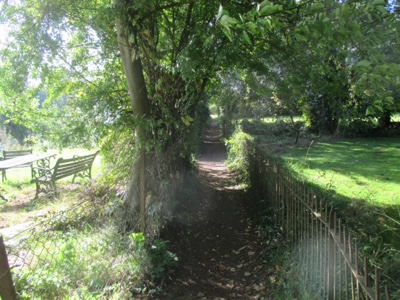 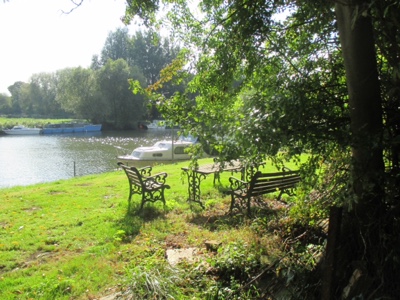 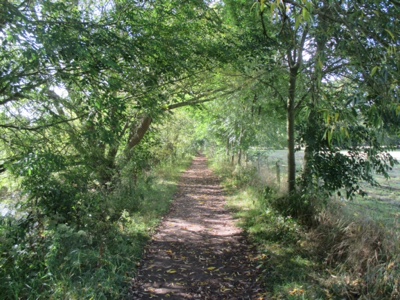 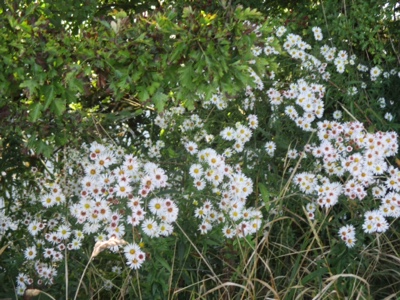 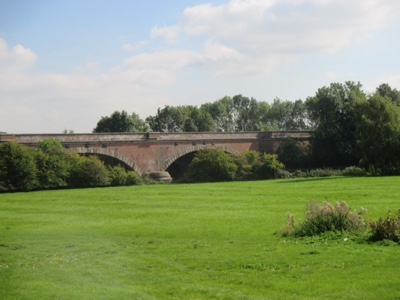 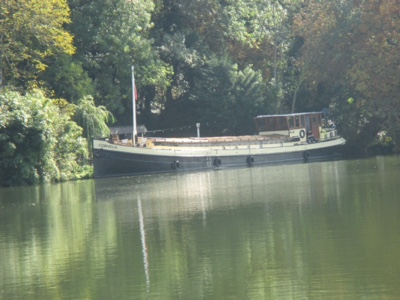 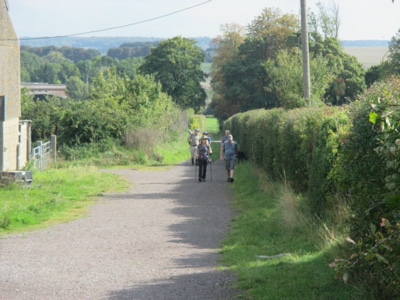 Tomorrow on to Reading...a longer day at 18 km's however a day of rest after that and a chance for Dennis and Elaine to see their daughter Maria! I am sure both are very much looking forward to seeing Maria and likewise Maria to see her maman Elaine!
Posted by GuyA at 13:55 No comments:
Newer Posts Older Posts Home
Subscribe to: Posts (Atom)