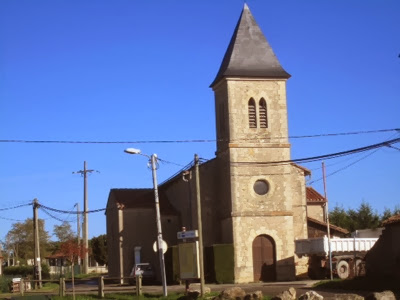 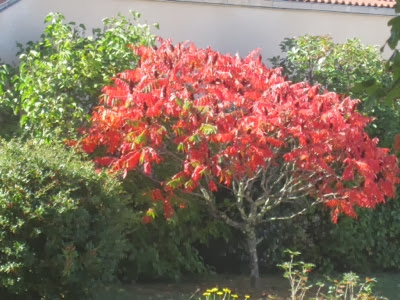 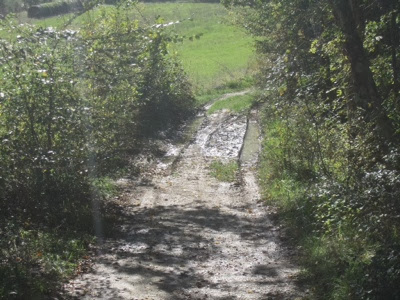 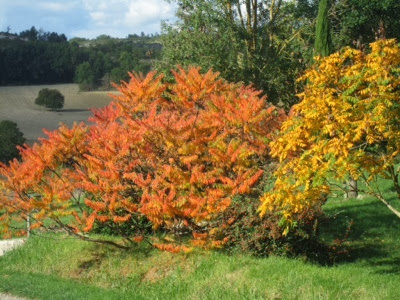 We are staying at the Nid des Anges...a superb Gite. We are sharing a room for 5 with demi pension at 32 euros. Highly recommend!
Posted by GuyA at 12:52 No comments: 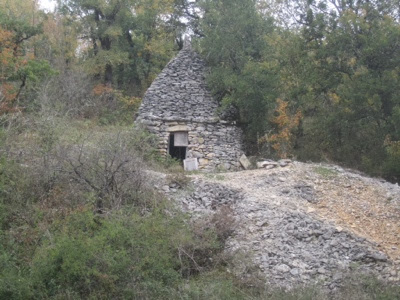 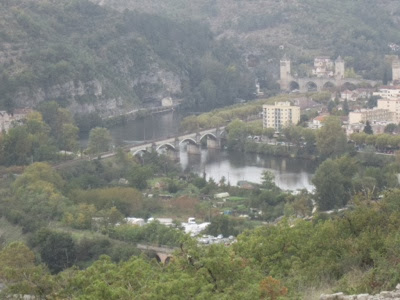 We are staying at the Foyer des Jeunesse de Quercy at Cahors. We are in a room for 4 with demi pension at 27 euros. Overall ok for a larger centre like Cahors however not really comparable to many other Gites along le Chemin
Posted by GuyA at 14:40 No comments:

A very very long day at 33 kms in a little over 7 hours. We were really moving today as the scenery wasn't much to look at (read boring) as most of the day was spent in a forest. I like walking on forest trails however hours of it is a bit much!

We did however walk in perfect weather...forecast for tomorrow is RAIN however for the last while the rain seems to always be a day ahead and hasn't materialized...hope our luck holds out!

Last evening Yosh, Frank, Cyrille, Georges and I went to a pizzeria...good time! Frank got things off to a great start by juggling potatoes prior to supper...he wasn't kidding when he said he had clown skills! Beers all round and individual pizza's.

My iPad is no longer toast as it turns out it needed a hard reboot...plug it in and hit two buttons and hold for 10 to 15 seconds...thanks Andrew for helping me out here!

Breakfast was at 7:30 and was very good.

Then the long walk started...I led for a good part of the day followed by Yosh, Georges and eventually Cyrille who left 45 minutes after us...had to stop at a pharmacy to take care of a bad cold.

As mentioned earlier, the scenery wasn't great mostly flat roads in a forest...33 kms were essentially a military type march. Somehow we were all ended up walking in together to Couvent in Vaylats. For me today is about as fast as I can walk over a sustained time period as we averaged just under 5 kms per hour over the day. A few pictures from the day... 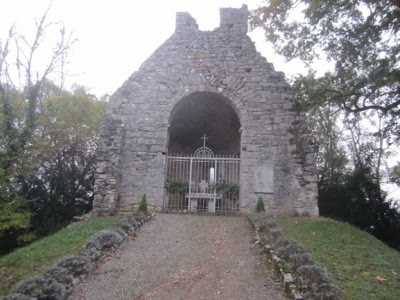 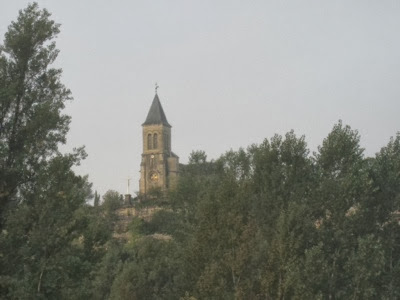 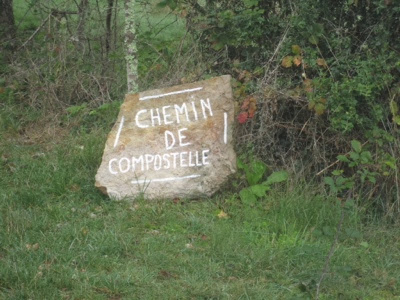 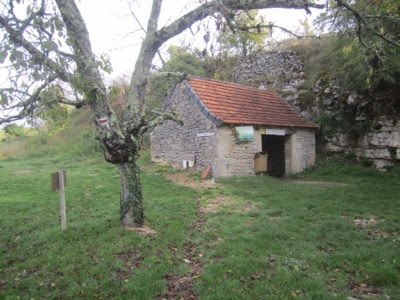 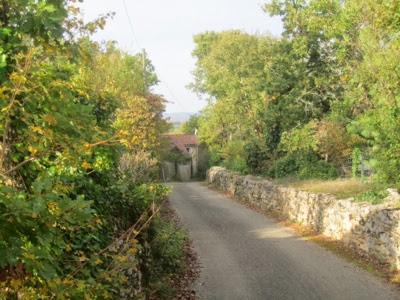 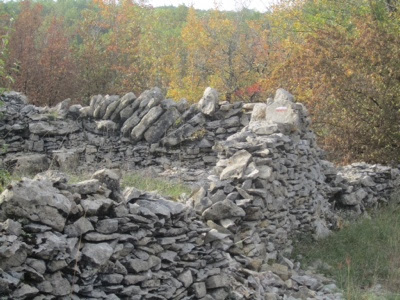 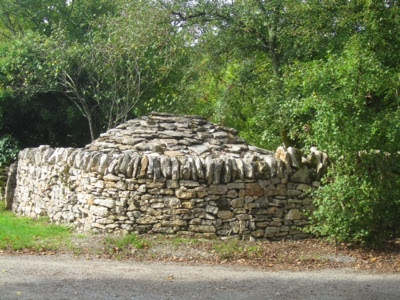 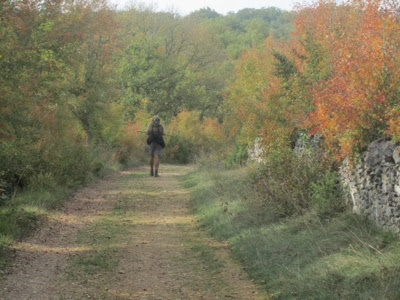 We are staying at the Couvent des files Jesus in Vaylets. I am in a shared room, lunch tomorrow and demi pension for 32 euros. Plus you can have a beer for 1 euro! Highly recommend!
Posted by GuyA at 14:04 No comments:

A long day at 31 kms or so over 7.5 hours however it was sunny and quite warm. Last night we took Daniel out for supper as mentioned in yesterday's blog.

What a class act Daniel is...72 years old with essentially one functioning lung...spouse who can no longer walk and not one single word of complaint. He was very emphatic about how lucky he is...family, friends, past work etc. I felt inspired listened to him as Cyrille obviously did as well.

Earlier in the evening Daniel bought a round of beers (this pilgrim always has to stop at one!) at a sidewalk cafe. I had a "brune" which is a special beer from Belgium...fun time for everyone. It's easy to see that Daniel is struggling a bit as he would like to keep going however he cannot.

We went for supper and ordered from a 4 course menu for 15.5 euros...it was outstanding!

Steak and fries...no picture. I should mention that I take a fair amount of ribbing about my taking pictures of what I eat. I just tell them that in Canada we eat different foods (may have exaggerated a bit by saying our diet consists of beaver, moose and pemmican only) and that is part of the adventure.

A funny encounter at the restaurant where the organizer of the Perpignan group of 7 or 8 walkers came and joined us as we were finishing up. He sat beside Georges and just unloaded about about his group. He whined, complained and said that never never again would he get involved in such a walk..."they don't know how to walk...they get tired quickly...they get lost...they don't like the accommodations...they let little hurts get to them etc. etc."

Daniel, Cyrille and I watched as our Perpignan pilgrim would place his head in his hands, shake it vigorously from side to side and wring his hands...all the while looking for support from Georges who was stuck trying to listen. We killed ourselves laughing...trying our best to cover it up with stories not to insult.

However on the way back to our dump in Figeac the tables were turned as the Perpignan gentlemen, scarf and all, who by this time had had a fair amount to drink went to say goodbye to me. I extended my hand, he took me by the shoulders and embraced me (huge hug) and kissing me on both cheeks.


Georges and Cyrille thought that was hilarious in that apparently I went stiff as a board...I told them that I thought that was how things were done in France. They thought that had I not turned my head in time I would have received a greeting full on the lips. For the rest of the day they kidded me about my "special friend"...maybe it was the gift of a Canadian Lapel pin...may have to be more careful going forward.

At breakfast there were 5 others outside of our group...walked around and gave them each a Canadian lapel pin...young boy seemed really pleased as he kept looking at his Mom and pointing to his pin.

During the day I handed out 3 Canadian lapel pins to older ladies who crossed our path. I'm sure they are still talking about the pilgrim who just stopped and gave them something, said bonjour and just kept going down the trail. Pins were also given to a young girl, maybe 8 or 9 who was helping her father as he was hunting and the owner and his mother of the Gite des Pelerins in Carjarc.

Cyrille has appointed himself as my unofficial agent for distributing the Canadian lapel pins...often pointing to someone and telling me to give them a pin...pretty hilarious and fun. A few pictures from the day... 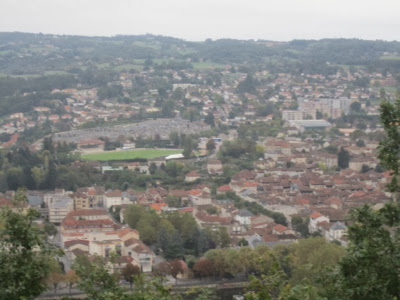 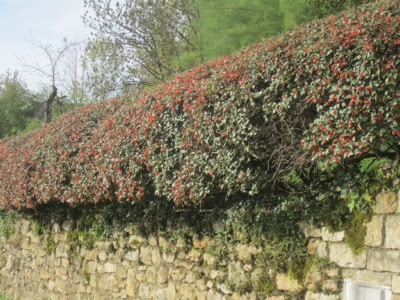 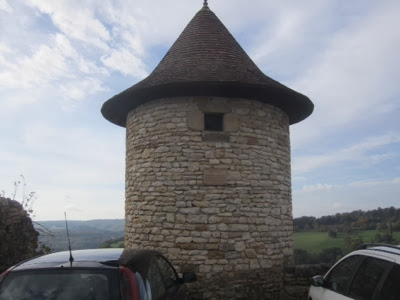 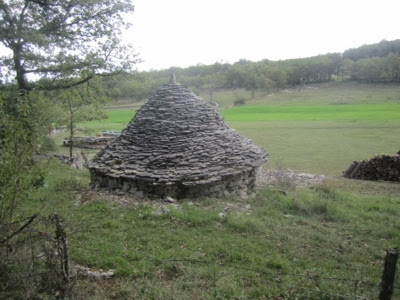 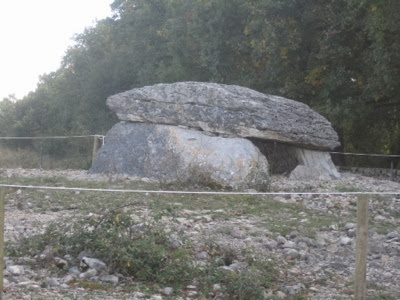 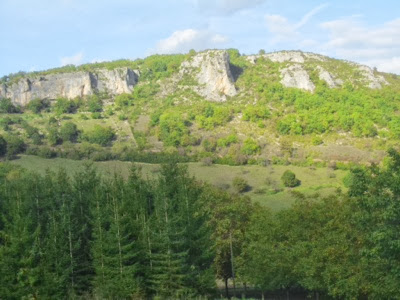 So far, touch wood, blisters are at bay however have some soreness under my right foot...trying my best to soften the landing spot for my foot however the thousands of steps take their toll. If nothing changes I will be able to deal with this ok.

One incident from today that will stay forever burned in my memory. Frank was ahead of us on the trail. Yosh as is his custom was pulling away from the group with Georges in hot pursuit with me a short distance behind. Cyrille, as usual was somewhere behind us having left an hour more after the group as he dawdled with his daily preparation...however he would walk so strongly that he would arrive at the final location shortly after us.

I rounded a corner of a wooded area into a clearing to find both Yosh and Georges stopped in their tracks conversing with Frank. No big deal....rest breaks are good...except Frank was stripped to his speedo slip "underwear" basking in the sunshine. Apparently the day was glorious and he felt the need to sunbathe for a while...we left shaking our heads.

We are staying at the Gite des Pelerins in Carjarc which is a great clean facility which really caters to pelerins. The owner greeted us warmly with an offer of a fruit drink and conversation about le Chemin. Clearly he was a former pilgrim who understood what we were doing and the physical and mental effort required. The cost was $15.5 euros with breakfast. Highly recommend!
Posted by GuyA at 13:11 1 comment:
Newer Posts Older Posts Home
Subscribe to: Posts (Atom)