Today was an important day where I felt like I was part of something bigger than just walking the trails...felt like I had joined the ranks of being a pilgrim. I walked over 24 kms over 7 hours which included a fair amount of climbing to Prayssac.

Last night turned out to be a very very special time for me. It started with supper where I shared a meal with 25 or so pelerins from different countries and walks of life. At my table were Georges, Raymond (his last night), Yosh and Daniel.

Supper was a self serve affair from large pots placed on the tables by the hospitaliers.

After supper the entire group went to the cathedral for a 20:30 pilgrim blessing where I was asked to read a short prayer in English, Jean-Pierre (Perpignan) in French and a Swiss lady in German.

This was followed by a rather long explanation by the head priest on the timpa above the cathedral door...essentially devil to the right and heaven to the left!

The highlight of the evening followed which was organ music...wow that was spectacular sound for 45 minutes or so...could have listened to this all night. We were in the loft besides the organ and then downstairs in the Cathedral where the music seemed to be everywhere.


At some point I met Jean-Pierre from Perpigan who went into the history of this region of France and Spain where 6 million people live and are seeking independence. I gave him a Canadian lapel pin...he was super delighted! Shortly thereafter he was on the phone to his daughter and apparently she had asked Jean-Pierre if I had a spare peenz...sure I have lots!

Jean-Pierre then asked if I would speak to his daughter as she wanted to thank me...must have been a 5 minute thank you that seemed to go on forever...again really excited over this momentous gift!

In the hallway I had 3 or 4 pilgrims approach me and ask if I was the Canadian giving away lapel pins...they wanted one which of course they received. Now I have an inkling of what rock stars must feel like...I was a celebrity on the Le Puy pilgrimage route!

I later found out that Jean, 50 km a day walking machine, with whom I had walked in the snowstorm had hurt himself and had returned home. Too far...too fast unfortunately.

Breakfast was again a time where everyone gathered at a table. Overnight I became part of a walking group comprised of Georges, Cyrille, Daniel , Yosh and me. Reservations were made by Georges for the group...this was the last time I planned anything for the rest of my walk. I simply let go and everything became much simpler!

I left first, which would become the pattern for the next 3 weeks, with the understanding we would meet for lunch at Praysac which was 11 kms away. The climbing out of Conques was quite challenging and it took over 3 hours to reach Praysac.

I got there first and met Jean-Paul who runs a Donativo  (give what yo can) Accueil for pelerins. I was there for 45 minutes, tasting a number of Jean-Paul's creations, before seeing Georges (age 47), Yosh (age 69) and Cyrille (age 28).

After lunch Georges, Yosh and I essentially walked together until Livinhac le Haut. I should clarify that walking together means talking for a while coupled with long stretches of walking alone...then catching up to someone with the cycle continuing. Some pictures from the day... 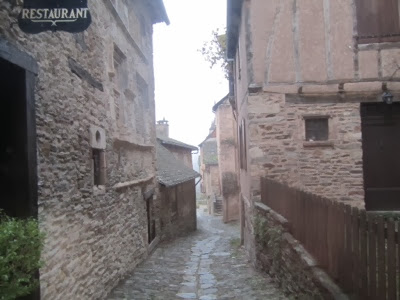 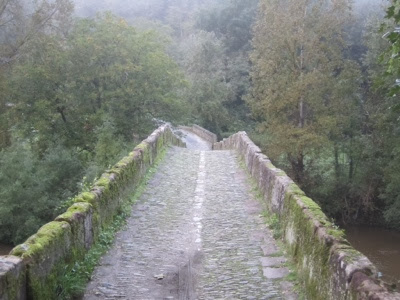 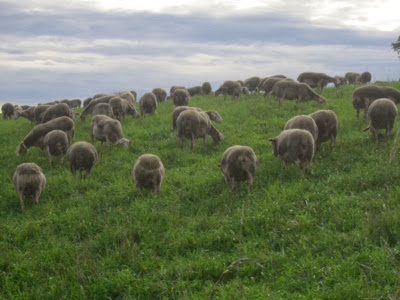 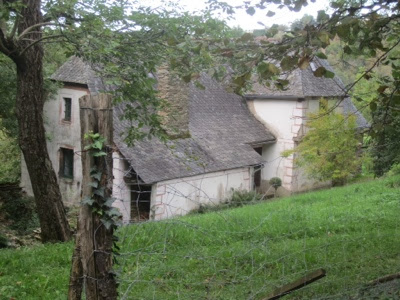 We chose to follow the GR65 into Decazeville despite warnings that we had a very steep descent into and a very steep climb out of Decazeville. Cyrille who left later after lunch wimped out and took the flat route into Livinhac le Haut...young guys simply aren't as tough as us older guys...or maybe they are smarter?

We are staying at La Bella Doreah, a Donativo house run by a couple who met as pilgrims on le Chemin. I am in a room (top bunk) with Yosh, Cyrille, Daniel and Georges. Looks great and highly recommend..oh and we were offered a beer when we arrived!