Hard to believe however I did it! Walked right across Switzerland (other than 8 kms to the French border tomorrow) and completed the Via Jacobi Camino. Tomorrow I will start the Via Gebennensis which links Geneva to Le Puy en Velay in France over a distance of 350 kilometres.

Back to yesterday which was a long day flying in to Geneva, train to Nyons and then a few kms to the B&B run by Vrena and Ulrich Baumgartner. I arrived around 3:00 in the afternoon and sat by myself quietly for 30 minutes or so marvelling at the fact that I was back where I had to leave 38 days earlier...

While meaningless for anyone reading this I decided this picture had a rightful place in my blog. I was warmly greeted by Vreni when she noticed I had arrived asking me how I was...she was pleased I was back. When Ulrich her husband arrived a short while later he immediately came over, shook my hand, and also seemed quite happy to see me.

I was shown to my room...which was a real treat.

Vreni and Ulrich Baumgartner's B&B is very highly recommended...really nice hosts, a great breakfast as seen below and a fantastic room...all for 40 Swiss Francs (I left a little more as a special thank you to Vreni for her August 17th help).

Also for someone not familiar with my blog Day 17 is missing...however it is summarized under the Camino is Over posting...that's where it will stay.

Was ready for 7:00 this morning as I knew a fairly long day was ahead of me...estimated 29 kms...did you know that it's DARK at this time?

Ulrich and Vreni joined me and we chatted away for a while...I signed and wrote a thank you in their guest book and handed them each a Canadian lapel pin. Vreni was really pleased and Ulrich looked at it kind of funny and then blurted out " un pendant d'oreille?"... an earring? He was quickly corrected by Vreni...well guess what...a conservation about Canada immediately started as they went on a trip to Canada a few years back...Calgary, Banff, Lethbridge, Toronto, Niagara Falls and Montreal were all mentioned.
I wish I had a $100,000 for each time my Canadian lapels pins generated a similar reaction...would be rich!

Today I walked 31.7 kms...very precise I know however my Bad Elf device is back... 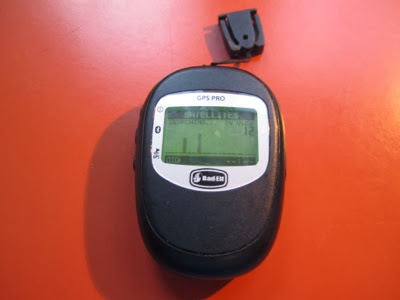 I will use it in a modified way...to track distance walked and elevation (high and low) and not to show where I went as this is sometimes embarrassing (see story below)...Greg I hope you are pleased as Bad Elf was designed by a  System Architect!

Walking for the first few hours was simply a delight...felt good to be back and active again...a few pictures... 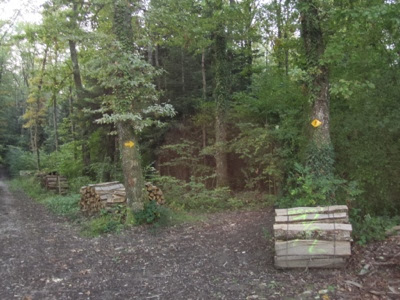 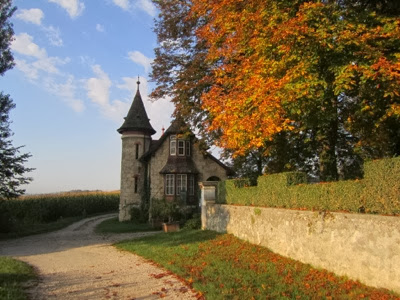 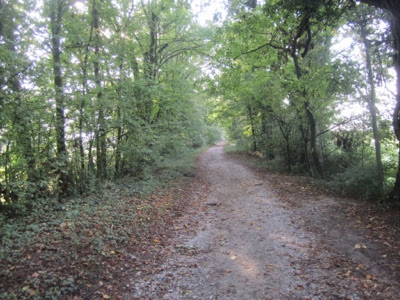 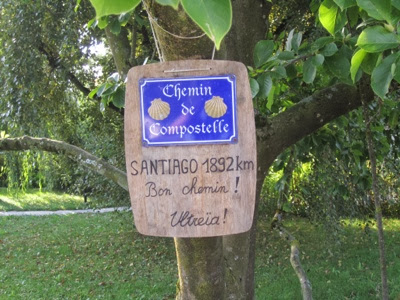 And then I was in Coppet...30 minutes earlier than the average Swiss walker as per time estimates or around 10:15. Here the fun started...followed the signs down Ave de la Gare right to the lake's edge...then the trail petered out as I can't walk on water! (Can think a few people reading this who think they can!)

A lady wished me a Buen Camino so I asked her where the trail went...she did not know. I wandered around for 5 minutes or so and then asked a few guys working. The young guy had no idea however the older gentlemen said I had to go back up Ave de la Gare and take the road which ran parallel to Ave de la Suisse ( this road was a few feet from where I received the directions). So back I went for 5 minutes or so...however I stopped at the train station and asked someone...he was new to Coppet however he asked the bus driver.

The bus driver said to go back down Ave de la Gare and take Ave de la Suisse...straight to Geneva...15 kms. Ok off I went back down to where I was earlier at the lake...walked up Ave. de la Suisse for 5 minutes or so however I knew it wasn't right...no Via Jacobi signs! I was about to turn back when I saw a police station...why not stop as this is an Emergency! The police officer was talking to someone about some burglary of some description and didn't seem to share my sense of emergency so I stared at a wall map of Coppet.

There was the parallel road Ave de Tanney...I had to go past the Gare...so off I went back up Ave. de la Gare. This time I was very sure...until I walked 5 to 10 minutes on Ave.de Tanney and again no stupid signs! I was about to scribble a sign "Pilgrim lost - please help" and sit down at a street corner when I came upon an elderly gentlemen...he told me I was on the right path and to keep going to Tanney...I could have hugged him...but I gave him a Canadian lapel pin instead.

I kept walking however it still didn't seem right...no signs again...until I came upon a fork in the road...left/straight/right...take your pick. I decided to go left as it was going towards the lake. After another 5 to 10 minutes minutes or so I was getting ready to lie down in the middle of the road in the hope that I would be sent to the police or something...until I saw a big Tanney sign...I was there...well not quite!

The sign turned out to be an unmanned railway crossing...however there was another elderly gentlemen who was talking on the phone...so I raised my arms and poles to ensure he saw me and waited and waited...seemed like forever however he was kind enough to recognize someone in desperate need. I explained that I had lost my way (didn't tell him I was totally clueless at that point and on the verge of a hissy fit) and wanted to walk le Chemin St. Jacques to Geneva.

Easy he said take the next left...walk until you hit a road and follow it in to Geneva. I was so relieved ...he got a Canadian lapel pin big time. So...a few minutes later my prayers were answered and I was on...Ave de la Suisse...YES the same one where all this started about an hour ago.

So I resigned myself to walking it...knowing that I was carving new pilgrim territory coming in to Geneva. It was actually a fairly pleasant walk all the way in (about 12 or 13  kms at that point)... 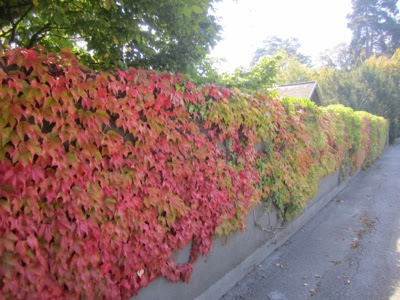 At exactly noon I came upon a park bench and sat down to change socks...yes this a big deal...as this was a suggestion from Nancy (sister in law) who has been helping me with strategies pre and post blisters (none today!) and I am listening!

I felt like the prodigal son returning to the official Camino walk. A short while later, with the help of Google maps, I was in the Geneva City Hostel.

This is a great, very clean and well run facility. I treated myself to a single room at 66 Swiss Francs per night which is high compared to other nights however is a fantastic deal considering this is Geneva. It is 15 minutes walk from the old part of Geneva and the fountain therefore is ideally located.

They even had a stamp for my passport and the guy manning the info desk took real interest in my question about how to leave Geneva tomorrow morning. He pulled out a map, double checked against his computer and said this would be of benefit to him as well with future pilgrims. Should have given him a Canadian lapel pin but forgot...will leave one on the desk for him tomorrow morning.

So out I went for an hour walk or...and found where the Camino goes for the next 20 minutes or so...The hostel info fellow told me it was a bit tricky...little does he know!


So all in all a great first day...oh and the closest I came to a dangerous animal was hearing a cow mooing in the distance.

Tomorrow on to France and it's 1,100 kms or so to St Jean Pied de Port where I hope to finish before returning home Nov 15th.