Today...well there will be days like this...move on to tomorrow and all will be better. In an attempt to paint a realistic picture (some may say I stretch a few things sometimes) today was long (estimating 34 kms although Bad Elf says more again), frustrating, boring and painful.

There end of Day 27 blog...by the way I am writing on a short ancient wall outside of my hebergement Chateau de la Gorge...it's 4:45 and apparently I will able to enter only at 6:00 as the daughter of owner is out picking grapes from the vineyard...harvesting is about one month behind and the students who would normally be doing most of the work are in school!

It is threatening rain but I have a backup plan which is a bus shelter a few hundred meters away. If the bus driver is unhappy about how I am using the shelter I will smile and give him/her a Canadian lapel pin. First last night which was great both for the company and the food!


There were six of us in total - Caty (owner), me, Claude (nuclear power consulting  engineer), a couple from Freiburg, Germany and Ulrika (?) a pilgrim from Linz, Austria.

Ulrika speaks German and some English therefore was out of the conversation a lot however I did learn she started a number of years ago from Linz and walks 2 weeks a year on the Camino...eventually she will get to Santiago de Compostela...assuming she stays healthy (her words)... I am guessing she must be 70 or so.

The German couple spoke French...they are a retired and travel in France for 2 or 3 months a year. A few years ago they went to Namibia Africa to their son in law's home village...the stories they told of that trip were incredible...not in my lifetime do I plan on travelling to Namibia!

Claude is doing consulting work for a few months...he retired last year from the French nuclear industry...which by the way supplies 75% or more of all the electricity in France. So I showed my picture in yesterday's blog and joked (really I wasn't totally sure) that I saw a nuclear reactor. He really had a good laugh as we ticked off the many reasons why that could not be so...I was within metres of it, no smoke, all by itself, windows etc. I note that a blog reader from Ireland also commented that I saw a water reservoir...boring!

Caty told us that we did not have to go back the way we came which is 2-3 kms outside the route...we could go forward and rejoin le Chemin...only 1.1 kms..maybe 10 minutes. That should have been my first indication of trouble...who can walk that fast!

She showed Ulrika and me the roads we needed to take in the distance with the usual left, right, left instructions. It actually seemed simple enough. Ulrika was really not happy as she said that was the way she came yesterday and she thought it was 3 kms. She blurted out 1.1 km by car and 3km walking to Caty in English which thankfully Caty did not understand.

I offered to walk with her to the junction but she said she was fine...so off I went. I turned right at the bottom of the road and had walked 300 meters or so when I heard and saw Ulrika at the intersection turning left...I indicated that I was going to continue a bit and we parted ways...so 10 minutes later or 25 minutes after starting I turned back in total frustration...the road was never ending. The worst of it is that I may well have been on the right path and just needed to go further...I will never know!

I did not know where Ulrika had gone so I angrily marched back to the B&B...only to be told that Caty was showering...so I went back the way I came yesterday. At 9:15 or a full hour and half after I left I was at the starting point! I estimate that I walked...with steam rising from my head and ears...at least 5 - 6 kms too much.

I blame myself for this as I have seen time and again that accommodation owners simply underestimate distances...they drive the distances and likely don't walk them. No matter...I was finally off although it took a while to let this frustration go. At some point I considered stepping on one of those brown slug like things just because...I managed to do the right thing and sidestepped the little creature!

An hour and a half later, after passing the four pilgrims from Switzerland mentioned in yesterday's blog, I met up again with Ulrika. We exchanged a few laughs and I kept going...she was still not a happy camper. A few pictures from today... 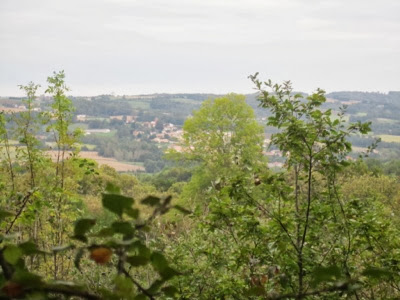 I mentioned boring...well I did find the walking somewhat tedious...maybe if I had not seen the incredible scenery earlier in my walk I would have thought otherwise. Forest walking was pleasant enough however it was tricky as a number of walking paths were crisscrossing each other...sometimes had to go up a few paths and then backtrack. A few pictures showing less than impressive views:

Many of the paths were very rocky which after a while is tough on the feet...I have walking shoes with a Vibram sole which is good however could have used good hiking boots today!

Unfortunately blisters are back...they just snuck up on me in two new spots. I will have to give it my best shot for blister care tonight...right now not too comfortable.

As I am writing this a couple living next door to my B&B came over to chat. They are an elderly couple who spend the winters in Morocco...was the highlight of my day...gave them each a Canadian lapel pin which started another conversation about how 10 years back they planned a 5 month camper can trip in Canada. Unfortunately the trip did not take place and they say they are too old to go now.

Update...I am I'm the bus shelter and it is now raining. Further update in Chateau and it is really raining hard now...will simply skip supper tonight (see below)...had a chocolate bar (my first in France) a short while ago and I want to rest and start fresh tomorrow...but watch out for breakfast!

I have been incredibly lucky with the weather to date...tomorrow is supposed to be steady rain therefore my luck may run out. If it does I will have a chance to test out my rain gear.

I am staying in an Accueil Jacquaire tomorrow which means at someone's place who opens up their home for a pilgrim...no set fee for staying there. I am looking forward to this.

I am staying at the Chateau de la Gorge which is actually an old castle. The daughter of the owner opened up the door for me and promptly told me she was not serving supper as I was the only pilgrim...apparently the message from her father did not reach her! The cost with breakfast is 28 euros...with dinner 39 euros.

The Chateau is conveniently located half a km from the end of the Pont into Chavanay. From my perspective I would not recommend it and give it a pass.