I DID IT! I have completed the 350 km Via Gebennensis route from Geneva to Le Puy en Velay. I am sitting in a reception room in le Gite Saint-Francois writing this blog entry...arrived around 2:30 after walking the 25 or more kms from Queyrieres and am waiting for the 4:30 room availability.

It's hard not to jump up and start exploring...I.e. the Cathedral is just around the corner however I need to take it easy for a bit...I plan on staying likely two full days in Le Puy en Velay to soak in what there is to see in this historic city and take care of a few other essentials.

Last night's supper at the LaBoria Dehl Chastel was a hoot. I expected it would be fairly quiet with just the hosts Eric and Christiane however there were a few other characters...first the food:

It was all delicious and yes there was plenty of opportunity for seconds...after all I am a hard working pelerin.

As I was entering the eating area I heard a number of voices which surprised me...sitting at the table were Eric and 4 guys from the village. Christiane was busy cooking away. Honestly not sure how to describe these guests...reminded me of a Red Green type get together.

Queyrieres I learned has about 30 people so guess what...everyone knows each other. The B&B is a gathering place and these guests just invited themselves in...the lights were on they said!

Apperatifs all round until maybe 8:00. I handed out 6 lapel pins which generated many questions about Canada...how cold is it to which I always exaggerate...is our sole industry wood...etc.

One of the guys had a red hat on, a checkered red shirt and his face was quite red as well...not the sun. His wife is apparently a singer who performs Edith Piaf songs...I think well known however I did not catch the name. He went home shortly after 8:00.

The next gentlemen, who also left shortly after 8:00, is almost indescribable...I wish I had a picture. I have never seen someone with a face so lined with creases and his nose was ginormous. He was a hoot...first question...did I walk from Canada? The other guys quickly told him that I could not walk on water...he nodded. Then have French people been nice to me...a reasonable question to which I said yes but the other guys thought it was funny...what else can he say? Eric later told me that this villager has lived a very very full life and that if you ask him any question he has seen and done it all.

Denis and Dede (Andre) stayed for supper and the conversation was flowing back and forth...at times I had trouble following. One of their pet peeves was around the cost of car keys. Dede had recently had to replace a key for 70 euros...Denis countered with his story where he spent 300 euros replacing a key fob...and on they went!

Everything wrapped up by 9:30...I had been treated to a special slice of life in a small village.

In the morning Eric explained to me a shortcut to get back on the route...I politely said no thanks and quickly found the route. I was walking along blissfully and then all the signs disappeared. I could see a village ahead so took a chance that the road I was on would get me to Monedeyres...it did and after an exchange of a Canadian lapel pin to a young guy for directions I was back on track. A few pictures from the morning... 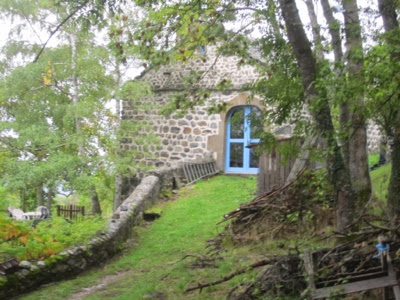 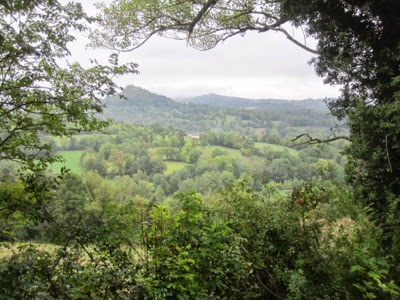 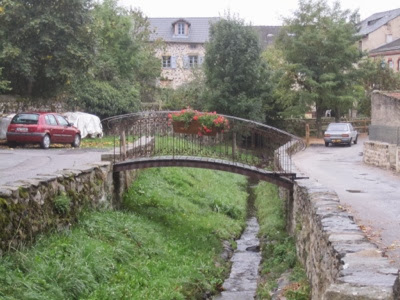 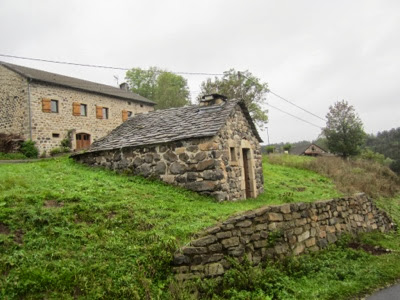 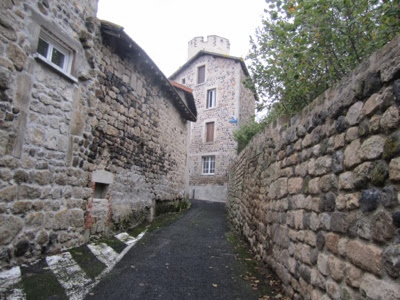 A frightening experience...sometime late morning I had two choices as shown in attached route pictures. I took the second one but it was perilous as it must have been at least 6 or more feet high...my Nepal bridge walking came in handy!

In Saint-Germaine-Laprade I was resigning myself to no lunch until Le Puy en Velay and then magically a Boulangerie showed up and then a picnic table just for me!


It felt like the best sandwich ever...French breakfasts are not too filling.

After Saint-Julien-Chapteuil the scenery was really not much to speak of...quite anti climatic coming into Le Puy en Velay either on a significant road or just beside it on a gravel road. No matter I was just so excited to walk it home.


I may combine my blogs and take a day's rest if I choose to take two rest days here...will see. Two Canadian lapel pins to a nun and her young helper, two to admin staff here and two more to two ladies who have just walked in. They are Swiss pilgrims and have also walked from Rorschach...however it has taken them 4 years to get here in chunks!

I am staying at the Gite Saint-Francois which is just on top of the Cathedral so a super location. The cost for demi- pension is 29 euros so can't be beaten. I haven't seen the room yet but I'm sure it will be just fine!
Posted by GuyA at 07:48