Today will be known as the foggy day as over 32.5 kms and 8 hours of walking it was surreal walking in the fog...more later.

Last night's supper was again a real highlight. I ate with Vincent and Carly (owners of Le Gite Plein Sud) , their daughter Louise and Rory. Vincent, the quiet one similar to how my dad was, is a retired country doctor. As such when he does say something he is coming from a point of knowledge...quite interesting,

Carly his spouse was born in Amsterdam and is currently a tour guide in Le Puy en Velay where I will be tomorrow...would really like do take a tour with her as she has an easy outgoing personality. Vincent and Carly have traveled extensively including Canada and Japan where they lived for 3 months.

Louise is the oldest of two daughters and spent a year working in Canada in a child home care situation. In her travels she met Rory, born in Surinam (formerly Dutch Guyana) while travelling in South America. They live in French Guyana which remains a colony of France...French people can work there without any requirements. They married a year ago in French Guyana and are in France to year end as they await birth of their child...oh and they got married again in France.

It was quite an interesting conversation...learned a lot about French Guyana...a bonus! Four Canadian lapel pins were given...three of them were worn immediately...guess who was somewhat reticent.

I ate extremely well...Carly made sure I had seconds as I am a pelerin in need!

Breakfast was at 7:00...Carly had to drive to Maufaucon as they were out of bread! 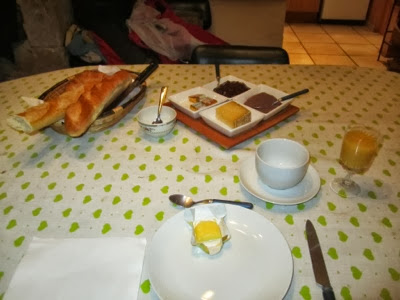 Vincent then kindly drove me back to my starting point in Les Chomats..an interesting drive in fog so incredibly thick it was like pea soup...honestly maybe 20 feet visibility tops!

So the morning was walking in very foggy conditions which meant I had to be very careful for route signs as often they were not visible...thankfully the route involved long stretches. 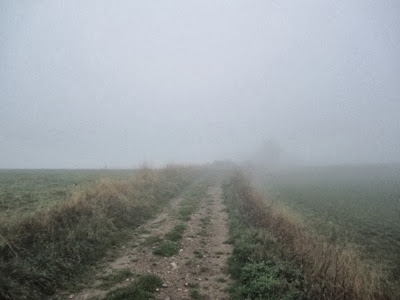 While in Tence I came across an open boulangerie and came out with petites allumettes or some type of flaky little squares...10 for 1.1 Euros. I was pretty sure they were healthy as I suspect vegetable oil was used therefore my daily vegetable requirement was met. A few other pictures from the day... 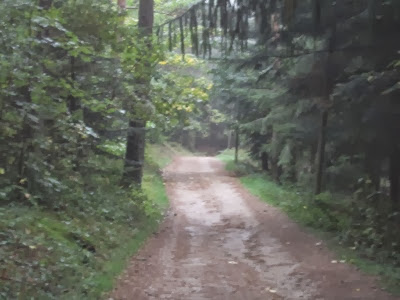 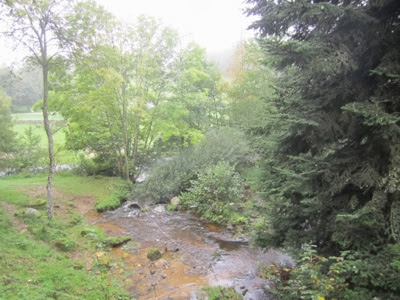 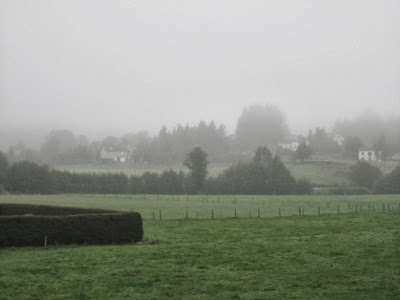 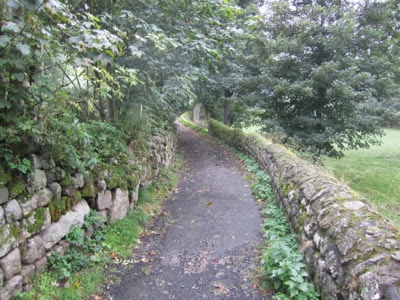 Early afternoon I saw some pilgrims in the distance and picked up the pace... 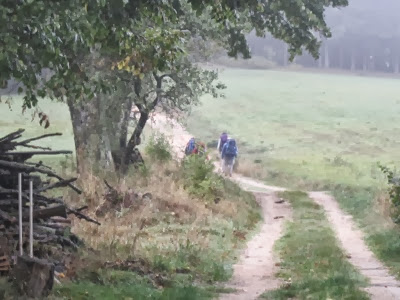 I was shocked when it turned out to be the same group of 4 that I met on day 26. Since then I have had three days where I have averaged 34 kms a day...they are much slower them me as I keep passing them. They must be walking 10+ hours a day!

Now I know some wise guy/gal reading this may say...well Guy if you wouldn't get lost so often you might be ahead of them!

I am really pumped as tomorrow I will complete the Via Gebennensis route and be in Le Puy en Velay...another 350 kms by the official guide or who knows how many by my meanderings. I will spend 2 or 3 nights there...being a tourist and stocking up on a few things...like a few Euros.

One thing I had not planned on...my adaptor which has a USB port has decided it is too tired and has given up the ghost. I need this for charging both my Bad Elf device and my phone. I am not fussed about the Bad Elf device however having a phone, as limited as reception has been, has been useful...not sure if I will be able to replace it.

As I entered Queyrieres I asked a few folks for directions to the B&B La Boria Delhi Chastel where I am staying...3 Canadian Lapel pins and a big merci!

La Boria Delhi Chastel is a beautiful place in a great location...again pricy by pilgrim standards at demi pension at 64 euros however after 13 days walking I can use the comfort.