A very nice day of walking approximately 20 kms in just over 5 hours. I got off to a later start today and was out the Gite door around 8:15...it was 2 celcius however there was no wind. I had my gloves on and an additional fleece under my jacket however within 5 minutes both were back in the bag. I even saw the sun for a while today...first time in the past week I think!

Last night's supper was excellent...Helene one of the principal owners of the Gite La Cabourne prepared it.

I gave Helene a Canadian lapel pin and she seemed very pleased (put it on her purse immediately). It turns out Helene was in Canada in 2008 and visited Toronto, Montreal and Ottawa. She plans on returning as soon as possible.

In the morning it was suggested that the pelerins who were at the Gite should have a group picture with a group hug! Not so sure about this group hug thing however decided to go along with it (see Marg, Dinah, Brenda and Amanda I can be flexible!)


Ok there was no group...but I am hugging myself! I was the only pelerin in the Gite which can hold 46 people...weird feeling! I seem to have hit a starting date when no one else decided to start the walk so this may well be my situation for most of the Le Puy walk...Helene did mention she has some reservations for next week...I left 10 Canadian lapel pins behind for others.

The walking had some elevation gain out of Saint Privat d'Allier however the tougher part was later out of Monistrol d'Allier where there was a 450 meter gain over a short time period. I think my earlier walking in Switzerland and the Via Gebennensis is really paying off as I am handling the elevation gains quite well so far. Scenery was really something...a few pictures... 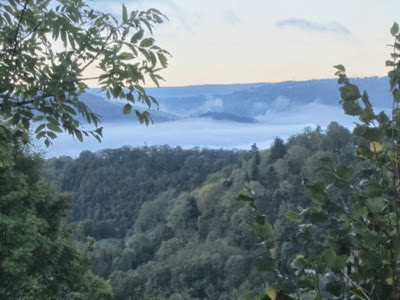 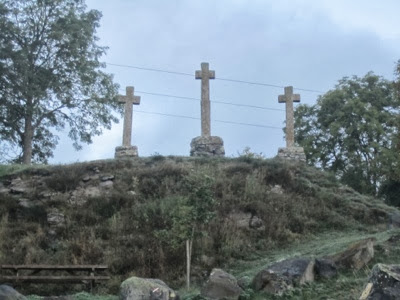 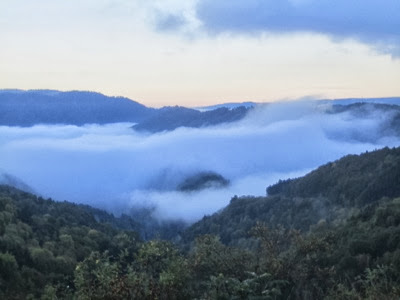 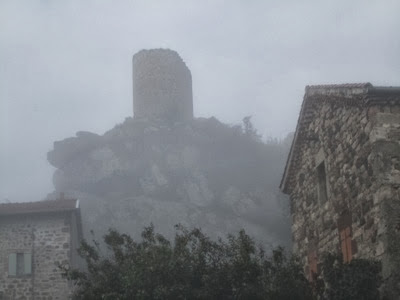 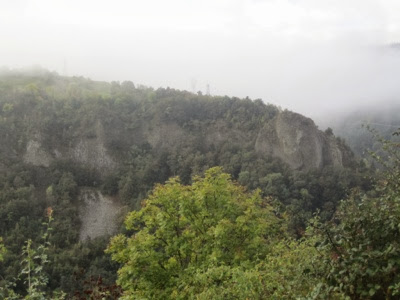 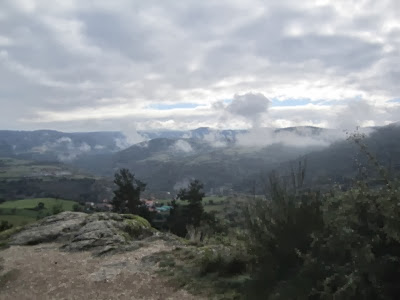 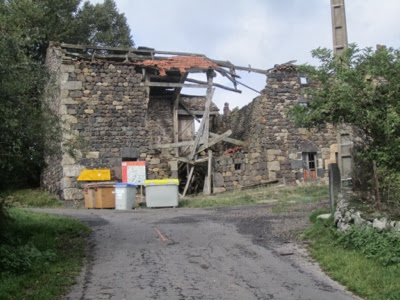 In Monistrol d'Allier I turned a corner and coming up the GR65 in the opposite direction was a lady with a fully loaded donkey. She asked me if I was from Quebec (saw my Canadian flag on my bag) and then mentioned that it had snowed higher up and the conditions were a bit icy. Sorry I did not get a good picture of her as this happened so fast...did not even think to ask her where she had been or offer a Canadian lapel pin.

Thinking about it I am quite sure I met my first true pelerin who was walking back from Santiago de Compostela...she really had a weathered look about her. Walking surfaces...over the course of the blog I have commented on some of the toughest walking surfaces where great care is required...roots, rocky slippery conditions. Today was no exception especially coming into Monistrol d'Allier where the going was very slow at times.

There are however some excellent walking surfaces and I thought I would show two of them. Also a few interesting pictures...at least for me!

So I went to the house indicated by the sign where a lady had opened up a shelter and prepared the omelette below with mushrooms for 10 euros...Future Pilgrims I highly recommend this. She asked me if I had seen other pilgrims today...she had not however 5 stopped at her place yesterday...gave her a Canadian lapel pin. 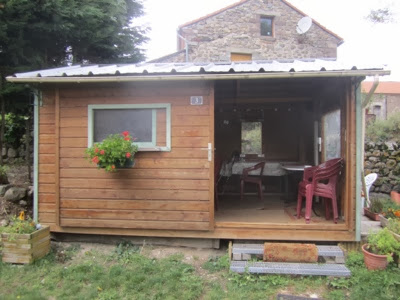 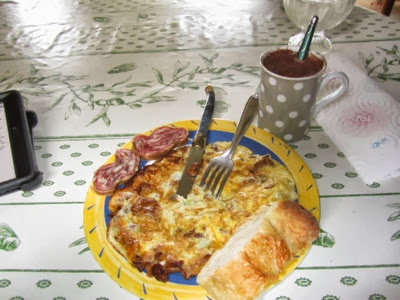 I am staying at the Chambre d'Hotes l'Etaple in Saugues. Christiane who runs the B&B with her husband was kind enough to welcome me at 2:00 and offered me some tea and a biscuit...was nice as it had gotten cold (gloves back on) over the past half hour.

Christiane's  daughter and baby girl arrived shortly there after...gave out 3 Canadian lapel pins...her daughter owns the boulangerie/pattiserie next door...hmmm may have to see what they have after I finish this blog.

As mentioned I am staying in the Chambre d'Hotes l'Etaple in Saugues...first impressions are great. I am in a room and even have access to a den down the hall where a Camino coffee table book is available. The hebergement is right on the Chemin which is great and is 37 euros for the Gite or 50 euros for the Chambre d'Hotes door demi pension. Look forward to supper tonight and believe it will be highly recommended.