First day on the route Le Puy...let's call it a learning day...more below.

Last evening I left le Gite Saint Francois at 5:45 looking for a late supper...what a fool! I went into 3 restaurants, where the prices looked reasonable, and even though they were clearly open they looked at me as if I had rocks in my head...please come back at 7:00 to 7:30. I smiled and said I would be back each time...no way...I was hungry.

So I walked around a very short while and found a boulangerie that sold pizza slices and cookies...perfect!

This morning I met two fellow pelerins in the self serve breakfast room. Danielle who was looking to walk to Montbonnet which is about 16 kms...she had lost her partner a month ago and walking to have time to reflect...gave her a Canadian lapel pin. Michel who I met briefly was also going to Montbonnet...his reason two artificial hips...Canadian lapel pin as well. I wished them both a bon chemin.

Before leaving at 7:00 I signed the Gîte St. François guest book and left 25 Canadian lapel pins...indicated in the book to take them as a small souvenir from Canada for future pelerins.

While I only had 24 kms to walk I left early as I had heard there was significant elevation gain today...seemed reasonable...but it was not the right decision. In the end I thought the walk was challenging however still reasonable. Nor was the quick glance at the weather report for Le Puy en Velay sufficient! 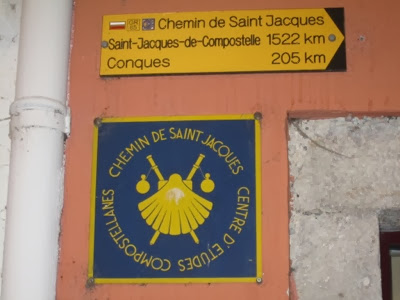 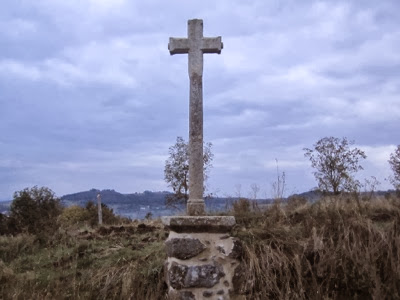 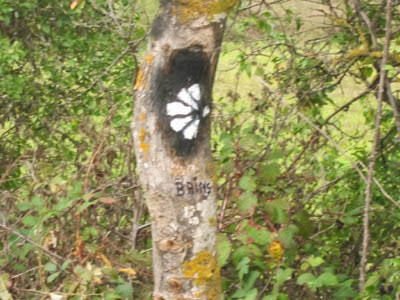 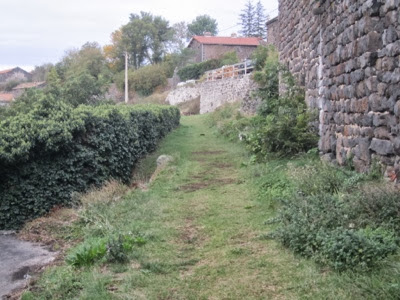 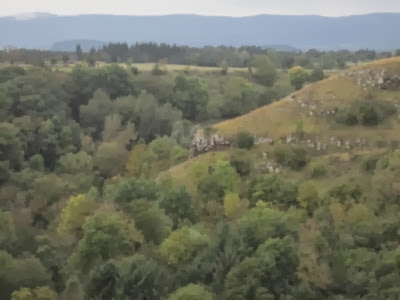 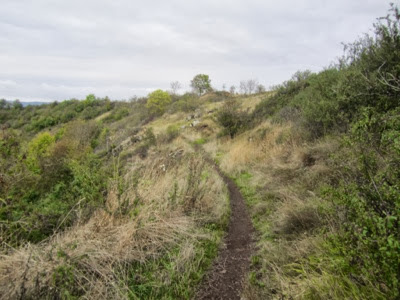 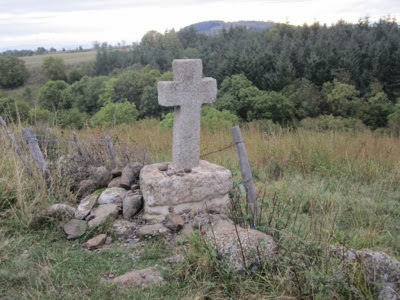 Around 10:30 it started to rain lightly...I had on my Tilley hat and world's best Goretex jacket made by Arteryx so I was ok. Shortly thereafter I saw a pelerin in the distance:

It turned out to be Ursula who I mentioned in an earlier blog (has medical issues and fellow Canadian)...she had put in a short day yesterday and was very slowly making her way forward...she did not look too strong...later in the day I met her again briefly in Saint Privat d'Allier where she is staying at another B&B.

A farmer in his tractor waved from the field...I left him a Canadian lapel pin on the seat of his smaller tractor by the side of the road.

Then it started raining much harder and steadily and the wind picked up and the temperature dropped...I put on the world's best rain pants also by Arteryx. I put the camera away mostly and kept walking and getting colder and colder. 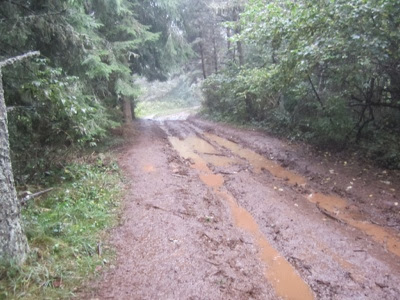 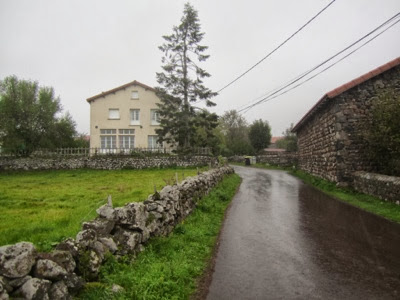 I was still making good time and 2 kms outside of Saint Privat d'Allier I saw a shelter and stopped for a quick lunch:

When I left I was shivering and my hands were really cold...fortunately I entered a sheltered section of trail as it entered Saint Privat d'Allier and out of the wind. The last km was really tricky as it descended quickly on a very rocky and slippery trail.

After 6 hours of walking over 24 kms I entered Saint Privat d'Allier ready to warm up. First I stopped at what can only be described as a French greasy spoon place run by a gentlemen who was anything but and had hot chocolate...which was awful and I am not fussy! I saw on the tv that all of France was under a cold spell...7 Celsius where I am...normal is 18.

No matter the rain had tapered off quite a bit and I was close to my destination. WELL I HAVE BEEN OUTSIDE THE GITE SINCE 1:45 and using the time to add additional clothes on and typing my blog on what I think is the Gites mailbox. Everything in the village is closed until 4:00 including the Gite La Cabourne!

So what have I learned:

1) It can be really cold in France so take the time to know what the weather will be like where you are going and not where you are!

2) Dress in layers on the Aubrac plateau which the region I am entering...I was underdressed...will pull out my gloves tomorrow.

3) Find out when the hebergement opens and plan accordingly. I may reassess my walking distances if all Gites open at 4:00... today I could have easily put in another hour or two. I would rather walk than sit around outside any day!

4) Sometimes, some may say often, I am really not very smart

Prior to entering the Gite, as I had an hour to kill, I went up to the church which has it's origins dating back to 1200...unbelievable that a structure can withstand the tests of time so well. The church was really dark however the stained glass window was quite spectacular. A few pictures taken from the high perch where the church stood. 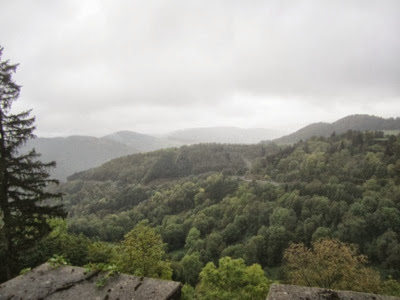 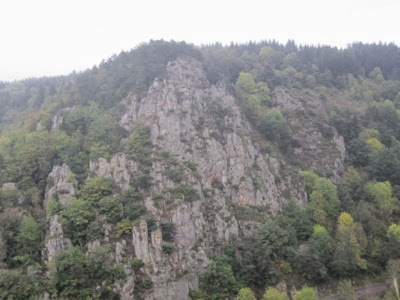 For tomorrow, in consideration of point 3) above, I was considering pushing further than Saugues which is about 20 kms away. I will stay with my initial plan to go to Saugues as tomorrow's weather is expected to be similar to today, the Gite owner has told me that I can arrive any time I want, everyone tells me that their is fair elevation gain and I wanted to take it easy in the early going. Once I leave the Aubrac plateau I can reassess.

So far I am the only pilgrim in La Cabourne...may have difficulty later with Gites closing earlier than they had indicated to me a few weeks ago.

I am staying at the Gite La Cabourne...cost is 36 euros per night demi pension in a shared room or 41 euros in a double room. It is a very modern facility and I am really impressed with everything.