Today was a perfect walking day...sunny, low 20's and other than 3 or 4 short heart pounding uphill stretches and 1 steep descent it was relatively flat. In total I walked 29.7 kms in just over 6 hours...again with a little extra thrown in at the end...more later.

Last night's supper was the most interesting of my journey (Switzerland and France) so far. The food was great and the company a lot of fun!

It started at 19:30 which is the standard time French people eat...I am starving by that time. Claude, Patricia (wife/friend), Joseph (not Yosef) and Albert were there.

All of the above was incredibly good and of course I thought we were done however Claude told me dessert was yet to be served.

A great meal however the best part was the company. Claude is really quite an interesting character...very diverse individual. He is a comedian, has written over 200 songs which he performs, has written two novels, is a local activist involved in all things political in his home village and a fervent environmentalist.

Small world...over 30 years ago Dawn and I backpacked through Europe and one day we went on a real journey to a very small village called Bois d'Amont in France as this is where my family name originates from. For some reason I mentioned this to Claude...guess what...Bois d'Amont is one of his favourites places to cycle to and to spend time in and around the village. How could this be?

As we were getting ready to retire for the night Claude brought out his guitar and sang one of his songs about the mountain...really strong melodic voice...everyone was clapping as he finished.

In the morning I made arrangements to purchase and send home one of Claude's books...out of interest and to support his efforts.

Breakfast was very simple...jams all made by Claude and Patricia, toast and tea in a bowl. 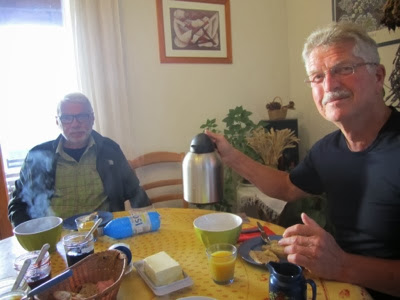 Claude asked Albert if we were walking together...he said no as Canadians were too fast so we parted ways with Joseph wanting more pictures.

The day went by fairly quickly...was kind of just moving along without paying much attention to anything in particular...sort of in a walking zombie zone. I had to pay extra attention to signs as I know this is when I get in trouble...was ok until the very end! A few pictures: 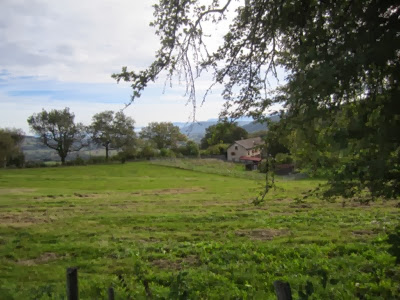 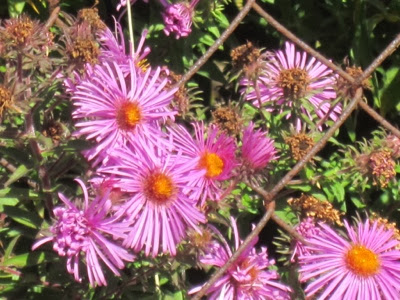 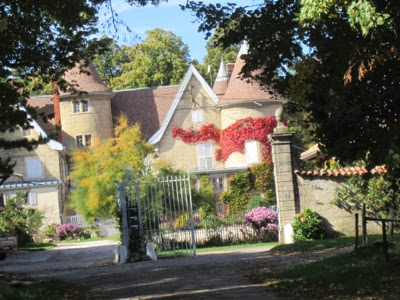 I had been trying for two days to find out where tonight's hebergement was - Villa Jeanette to no avail. So I walked to the church of La Cote-Saint-Andre and then to a boulangerie for lunch...note it was already well past 2:00 and I had been walking over 5 hours with only a few nuts and water. Seriously I did not find any stores of any kind in the small villages I was passing through. I did however eat well...

This was died and gone to heaven territory...however as I pulled out my iPad I saw my email had finally been responded to...well back 1 km or so where I had already walked to Villa Jeanette!

This morning I noticed that my blog had 99 subscribers...people that receive a daily email when a blog posting is made. 100 subscribers would most likely make this blog the most popular blog ever for someone from Western Canada, walking from Rorschach to Finisterre on a walk interrupted by a medical issue, married with 3 daughters, worked 35 years at an insurance company and owning a Tilley hat...so if your dog or cat has an email address please consider signing them up! One more!

I am staying at the Villa Jeanette just before La Cote-Saint-Andre...once again a super room as you can see below and I'm sure supper will be great however the price is steep for demi pension at 70 euros. With additional review I am sure you can find something less expensive...believe tonight will my most expensive stay to date on my Camino journey. 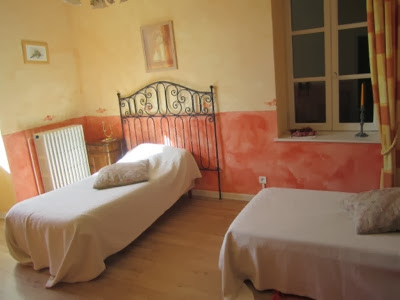