A real easy day today as there was simply no elevation gain as we walked through the Meseta for 27 kms in just under 5.5 hours.

We started quite early at 6:00 to both escape the strong sun and ensure we would get into Calzadilla de la Cueza at at early hour...we accomplished both objectives big time!

Yesterday's stay at the Casa Rural Casona Dona Petra was kind of a mixed one. The room was superb and I finally slept like a log (not sure if this is a real saying)...apparently sleeping right through a baby crying for over an hour!

Supper was however a bit odd...it started nicely with a cheese plate

Then came soup which was tasty but not the best we have had on the walk...Paulo asked what it was but never really got an answer.

Then came a somewhat skimpy salad and a delicious potato tortilla dish...


Ok so far doing quite well however before we knew it Paulo and I had a yogurt cup and Marc an apple. Paulo and I looked at each other...where was the main dish? The meat part? We paid 15€ for the meal which was by far the most expensive to date.

Next it turned out that the quoted price for the room was not being honoured as we were in a quadruple bed room...only 5€ more for the three of us however it left a somewhat bad feeling of being taken advantage of...oh well not a big deal.

I mentioned to Paulo that we should have had the assistance of a lawyer to ensure our rights were respected...he kind of smiled...Paulo is of course a lawyer who specializes in consumer rights in Brazil. I may have lost my invitation to his house in Brazil with my cheeky comment!

We knew from reading the Brierley Camino guide that today was not going to be a scenic treat so walking in the dark wasn't a big deal for us. The first 2 hours were on a gravel path along a highway...the last 3+ hours were along a highway and a gravel road.

It was really cool with the wind...so much so that I wish I had worn my gloves (they were deep in my bag...tomorrow they will be handy).

Really not much excitement, no dangerous animals...today...just grinding out 27 kms. Despite the scenery challenges I still very much enjoyed the walk although will admit that it can be tough mentally.

We had breakfast at 8:00 or after walking two hours at a bar in Carrion de los Condes...

In terms of Canadian pins I have not commented on them recently...they are still being distributed. A number of pilgrims have received them as have service personnel at Albergues or Bars. My two favourites for the past two days have been a French family of four...mom and dad cyclists with pull trailer for the kids and a mother, father, daughter Spanish family that I passed. The look on the daughter's face (4 or 5 years old) was priceless as she received a Canadian lapel pin. A few pictures from the day... 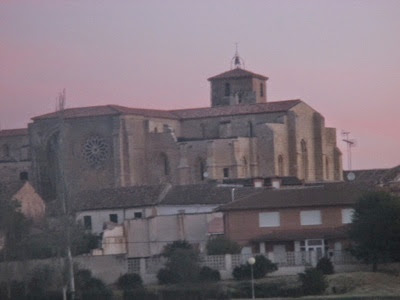 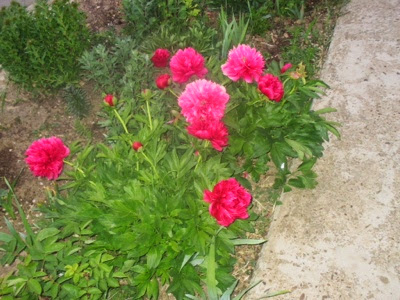 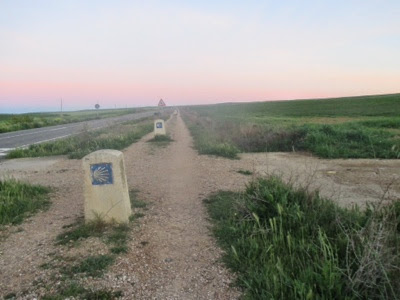 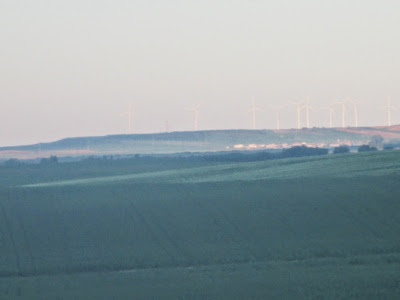 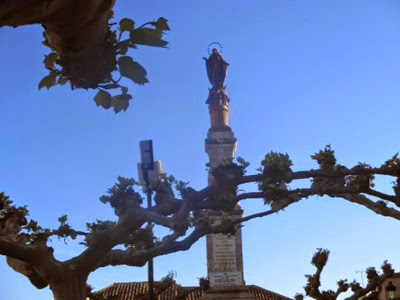 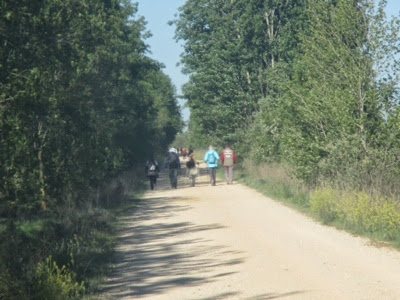 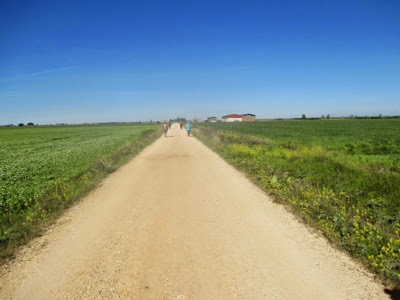 We are in the private Albergue Camino Real which is one of the Red de Albergues of the Camino de Santiago association. We have a super nice room for three...each of is paying 17€. For the first time we are noticing a number of pilgrims who are getting their bags transferred and walking with a very small backpack.

As I write this it is early Saturday afternoon...what a luxury to be off the road so early. Paulo is off to see a blister specialist...unfortunately he has a real bad one...hope and trust that he gets the right level of attention.
Posted by GuyA at 06:02