Another long but very peaceful walking day...8:30 hours. In looking at the entire planned trip yesterday and today represented the 4th longest back to back distance days...planned was 66 kms (sure I likely did closer to 75 or so!). The highest back to back planned days is later in the trip at 71 kms...so that is encouraging!

Before I get into the day....BONNE FETE MAM (mother) 90 ans! Pauline and Marc...svp donne Mam un bec et une embrassade! Mam is a very special person...always looking for what you have done right and supporting as such. I have been so lucky to have had Mam...while she is no longer able to communicate due to illness we know you are still thinking of your family and loving them.

Today was a nice sunny day in the low 20's...perfect for walking. Essentially nothing significant happened today...did not get lost (ok...almost), no dangerous animals, peaceful scenery and no outstanding people encounters. Just a nice walk.

A few pictures of Fribourg as I was leaving...I would really like to come back here as a tourist and just look around! So much history...


Last night Beatrice explained to me that there was a way to rejoin the Chemin St. Jacques without going back the 20 minutes to where I had left the trail. Go up these stairs, turn left on this road, another flight of stairs by a pink house...walk toward the train station and go to information if you don't see the signs.

NO WAY after yesterday's fun...straight back to where I started for this boy today! I did leave Beatrice a handful of Canadian lapel pins...her place was great!

Dawn here is a Citroen that I came across...sort of like the cars your Dad had...well not quite!

I was thinking about the many and varied gates that I have passed through in my Switzerland walk...so much creativity in the designs...here are a few. 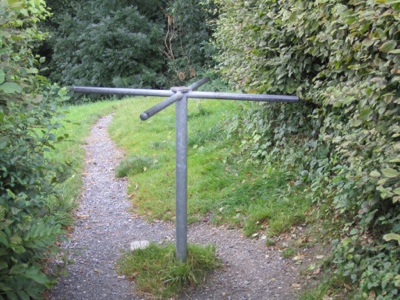 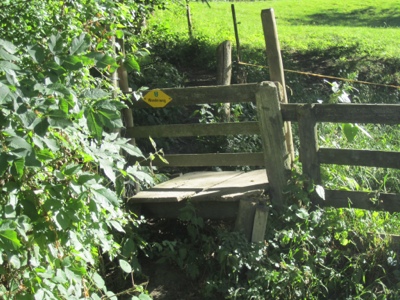 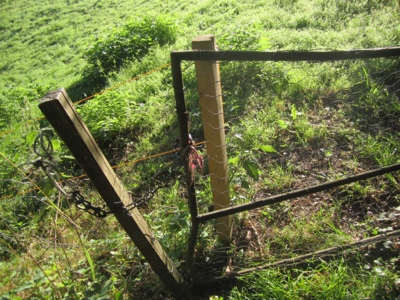 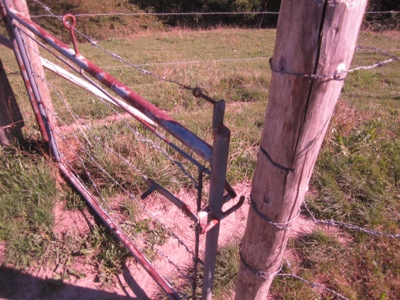 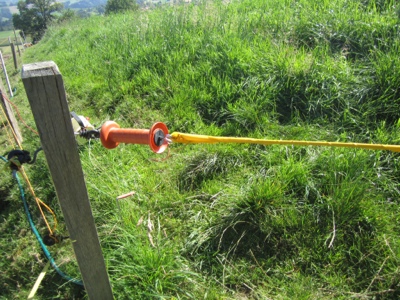 After walking for 5 hours...essentially non stop...and having eaten a handful of trail mixture and drinking water, I was ready for a break. It came in a small village Autigny where I stopped in at a magasin. YES that's French! All day today I have been hearing people talk French, greeting me with bonjour. What a difference it has made...I can now read, understand and have a conversation.


Lunch was incredibly good...tuna on a French mini baguette, nectarine, apple drink and a lemon tart with a strong lemon flavour!

After lunch I still had 3+ hours so I got moving again...as I neared Romont I was really taken by the views and the town itself. 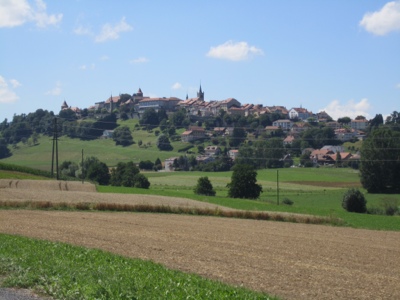 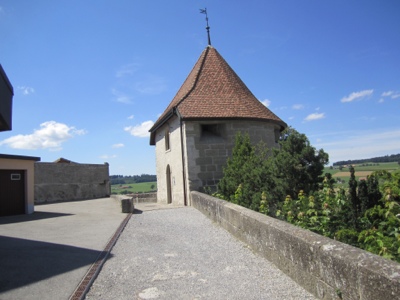 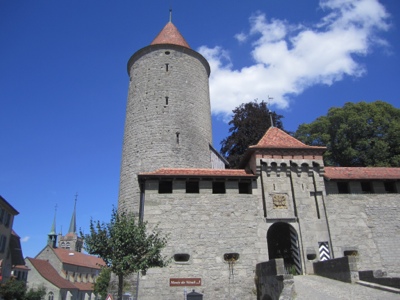 Romont is a medieval walled city with ramparts and known for it's stained glass work. Having done some stained glass I was interested in looking around a bit!

My B&B is located in Billens...just outside of Romont...as I neared the town I took out my iPad and was looking for the information. An elderly gentlemen was ambling by and I asked him where the house was located. He couldn't hear too well so I zoomed in on the iPad address. He told me that the street was just ahead...I thanked him and gave him a Canadian lapel pin...he seemed pleased.

It was a few minutes before I got my gear together again and hoisted the backpack. As I started walking I noticed the gentlemen waiting just ahead at a street corner...sure enough he was waiting for me and when I arrived he pointed out where I needed to go. He was also interested in knowing where in Canada I was from and about my journey. That was good!

Marie-Therese had two of her five grandchildren who are staying the night...left 10 or Canadian lapel pins for the family.

I would have liked to stay in Romont to visit a bit however could not find reasonably priced accommodations (sister's convent is closed for renovations). 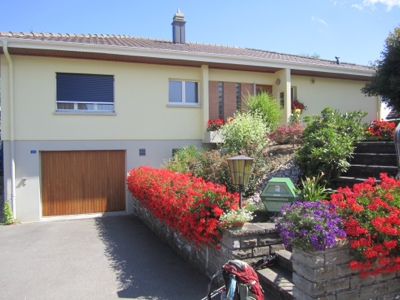 Had a great supper and expect breakfast will be the same in the morning...35 Swiss francs only!