Overall an easy day of walking today...although I did turn what should have been a 4:30 hour day of 20 kms into closer to a 6 hour walking day...more later.

Wasn't thinking rationally first thing this morning...hey it's a short day...why not backtrack 2 kms into Romont and have another look around. Then I thought...no why not finish earlier and rest! I must be getting wiser in my old age...chose the latter.

Also I want to take a minute and thank all of you who have made comments on the blog site, sent Blogger form contact comments or sent direct emails. I really enjoy receiving these and look forward to them...now Lise did you really have to send me 8 emails each with a one line question? (Je t'aime).

I have been asked a few times about how to make comments. Two ways...use the Comment link at the bottom of each blog and submit and everyone reading the blog can see your comment or if you prefer use the Blogger contact form at the bottom of the Blog page in which case only I receive the comment.

A few Swiss signs I noticed today...Switzerland is a very clean country...you may need the French dictionary to interpret. 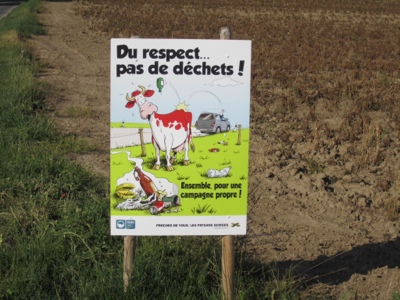 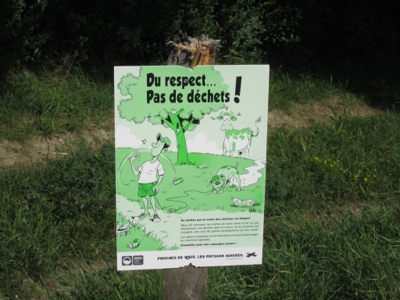 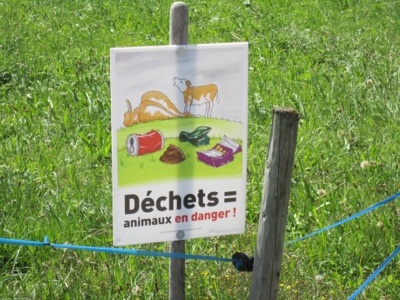 Sometime this morning I came through a village (most have no posted names) and there was a fork in the road with no signs. A very elderly gentlemen who was trying to weed said "par la". I thanked him and gave him a Canadian lapel pin. He looked at it and "pourquoi ca"... "Why that". I told him it was a small thanks but I could tell he was unimpressed.

I left chuckling to myself for a few minutes as I could almost hear "what am I going to do which this...I'm 94 years old!" Perhaps he chucked it...but he is right at some point we have to stop accumulating stuff (Pauline!)

As I neared Moudon around 11:00 I decided to take it easy for an hour and had lunch

I stopped in at a church and had a look inside...beautiful stained glass 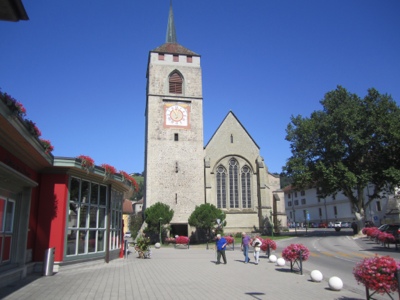 Before leaving Moudon I finally got to take a picture of what I consider to be the best job in the world...would gladly do this job in my retirement! You just putz around all day, deliver mail and say hi to people!

A few other pictures from today 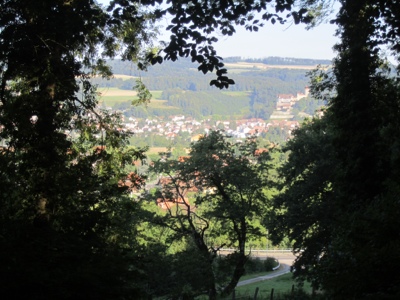 Finally around 1:00 I was approaching my destination for the day Vucherans...instructions I had were to find the sign as I entered the village and follow to Carine Bunzli's home.

I saw a man hole cover which said Vucherans water supply so I had to be close....yeah right!

For some time I had that feeling that I wasn't quite on the Via Jacobi despite the occasional walking path sign. Just after the man hole cover there was a fork in the road...to the right a few houses...to the left heading back toward where I came from was a path sign with a yellow arrow.

I decided to go ahead and crossed the highway into a small town...wrong...wasn't the right town. I backtracked and went back to the path sign with the yellow arrow and followed this bush trail for 5 minutes or so and decided if I kept going I would end up where I started the day...not good.

Meanwhile no one around to ask!

So I decided the right way was to go ahead and stay on this side of the highway...and there was a Vucherans sign! I was there...wrong! Another fork in the road and I took the left side as there were a number of houses...10 minutes or more later I was in a farmer's field....however luckily some folks were enjoying drinks in a back yard.

"Excuser moi"...they all started talking at once and eventually one of them took charge and explained I should have taken the right hand fork in the road and descend past the church and then this and that...I was thankful and handed out 7 Canadian lapel pins. The fellow had been in Canada last week! They seemed pleased with the small gift except one lady who said " je n'ai pas besoin de ça" I again left chuckling.

I moved past the church and all was looking good however another fork and I went left...walked for a while (found the Via Jacobi signs confirming I had not been on the trail) until I got to another farmers field. A young guy was working the field...with a big machine...doing I don't know what. I explained my problem and sure enough I had taken the wrong fork...so a Canadian lapel pin and off I went.

Not without further fiddling around I came to the following and was home of the night after coming to Vucherans the back door way on the fifth try after an hour and a half! I don't think I would have done well in medieval times planning an attack on a village. 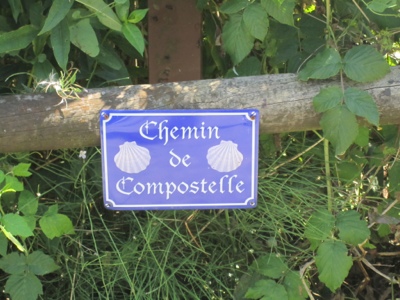 The Bunzli family Carine, twin boys (maybe 10 or so) and her husband just returned from Sherbrooke Quebec where they exchanged houses with a Canadian family! How many people have been to Canada?

Four Canadian lapel pins nevertheless...shortly I will be having dinner here...expect with family however I never know this for sure.

Tomorrow another short day to Lausanne...a major Swiss city. My feet which of course have not been happy felt better today...two days ago I found that my heel had a double blister ( a new one under an old one). Once I figured that out it was much easier to help the situation.

Had a very warm reception and the room and facilities are just right...Demi pension is 50 Swiss francs so the price is right. I'm quite sure this is a high recommendation as well. Bunzli family B&B in Vucherans...just follow the signs!!!