Another short 23 km day over 5 hours of very easy walking today. The countryside is very pastoral with rolling hills therefore the walking was very meditative in nature...so much so that one has to be extremely careful not to walk past GR 65 signs.

I set off first at 8:15, after a short food run at l'Epicerie. IT'S MONDAY AND FRANCE IS CLOSED...A MIRACLE TO FIND AN OPEN EPICERIE!

Jean-Paul was good enough to walk with me for 5 minutes or so to show me a short cut to regain the GR65...otherwise I would have needed to backtrack 500+ meters. So many times I have lost the trail in the past trying to follow verbal instructions of well meaning hosts concerning short cuts back to le Chemin!

Today was a cloudy day and it's getting definitely cooler...not too sure how much longer I can walk in shorts!

Unfortunately last evening was a real low point on the journey so far. Supper was very good and prepared by Jean-Paul the 72 year hospitalier. At supper we had Jean-Paul, Cyrille, Georges, me and the 6 pilgrims from last night in Lectoure. Outside of Cyrille the average age was at least 50+ but you wouldn't know it by the ensuing conversation...more later.

Last night before supper Georges, Cyrille and I walked around Lectoure for a while...a very impressive cathedral and views of the Pyrennes...a few pictures...

The interesting part is how Jean-Paul sets prices I.e. Cost of ingredients / Number of pilgrims = 2.35 euros...then Donativo so everyone gives more than this cost. The end result is that at the end of the season he is currently up 200 euros which results in Jean-Paul being able to pass on the excess to future pilgrims I.e. tonight free drinks...that was likely the root problem for the evening.

At first it was very pleasant with Jean-Paul singing a lengthy folk song which the ladies knew well. Cyrille and I piped in when one says oui, oui, oui or non, non, non. Easy enough and good fun!

Then the ladies from the Belgium couple started asking for Canadian songs...well to be honest they pestered on and on!  I tried to remember Land of the Silver Birch but couldn't so they starting naming French artists and kept pushing... I said sorry but my mind was blank. Finally I told them my favourite artist was Britney Spears...it's not but since they didn't know her that ended the request. Ok so far a little frustrating however no problem...

The alcohol was flowing and the voices , especially the ladies got louder and the comments more obnoxious. Jean-Paul who is very articulate would try and make some intelligent conversation however he was cut off countless times...a total lack of respect.

I was then quite frustrated and one of the husbands heard me to say that I was peeved with the lack of respect shown to Jean-Paul. Then the glass half full concerns came out over most any topic and on and on... I was tired and should have excused myself much earlier. French people talk extremely quickly...especially when drinking which likely contributed as well.

Jean-Paul seemed pretty beaten by the end of the evening...I would have exploded if I were in his shoes!

At breakfast this morning the Belgium couples seemed somewhat contrite and went out of their way to ask how things were. Oh well...there are many more highs than lows on a long journey. 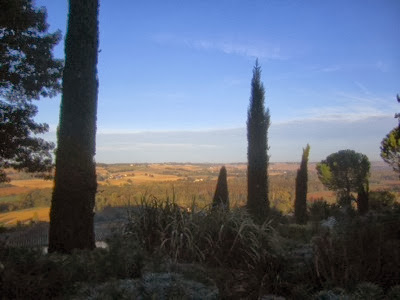 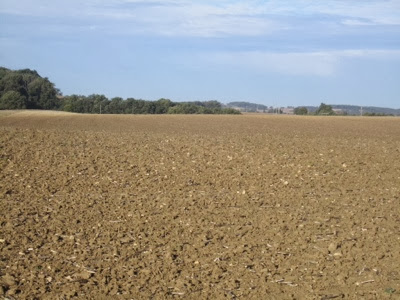 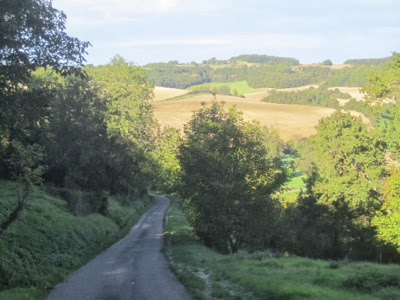 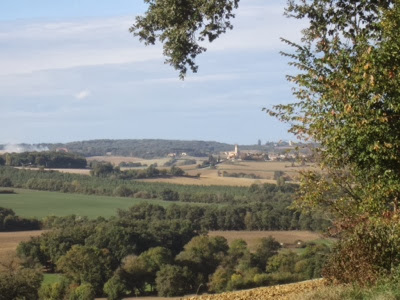 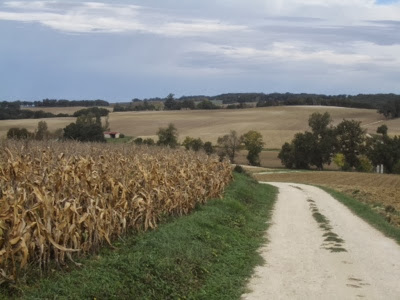 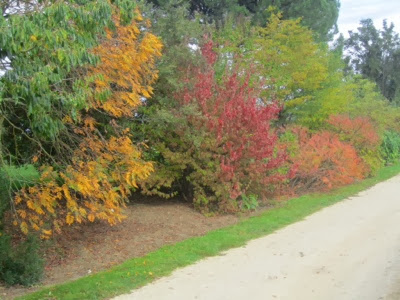 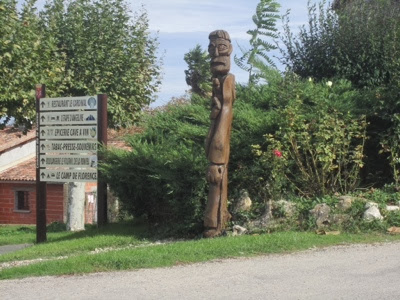 While today was a very quiet day I had a bit of a weird request in La Romieu...2 ladies completing a project for kids asked if they could take pictures of my pilgrim feet as I had my shoes off...sure why not...2 Canadian lapel pins for them. When in France...

Staying tonight at Les Arroucasses which is a super Gite in a really nice setting...everything is nice and clean. The cost for demi pension in a bedroom for 3 is 20 euros. 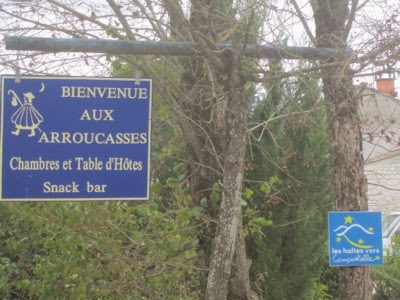