Another relatively easy and quiet day of approximately 6.5 hours over an estimated 27 kms. It's quite a learning experience as walking 25 kms or more a day has become totally normal and expected.

Perfect weather..really the days are just blending together at this point. Today was Yosh's last day so we will shortly go out for a drink to celebrate.

My blister protection seemed to quiet down the pain felt from yesterday...overall this return trip has been so much better than my first walk...thanks Nancy for the suggestions. Overall I am feeling good but have to admit to being a little tired.

Last night we did not have demi pension at the Gite so we went to the only open restaurant in Lauzerte...a pizzeria. It was excellent! I had a real tasty pizza called La Raclette


A somewhat bizarre and funny story behind this picture. I FORGOT TO TAKE A PICTURE OF MY PIZZA so I asked Jean Michel (from Cahors) who was sitting at the next table to take a picture of his pizza. He was with 2 friends who likely think this Canadian is totally bonkers...2 Canadian lapel pins to them.

Before leaving this morning I also gave a Canadian lapel pin to Michel at the Gite...he was terrific. We had a great buffet breakfast and set off by 8:30. After a stiff climb out of Lauzerte we were on our way. I like the challenge of an early morning climb as I find it helps to to get the walking motor going!

Cyrille...as usual was last to get started. 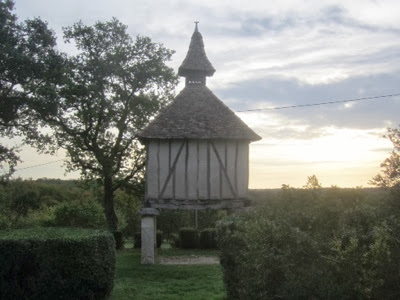 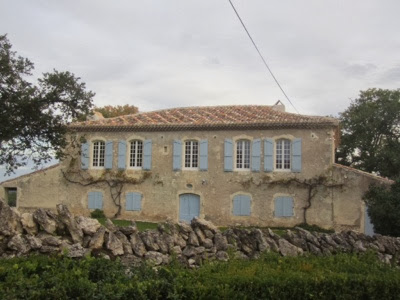 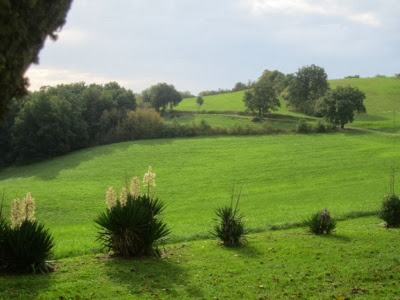 I had an interesting encounter in meeting a pilgrim coming back from Santiago de Compostela. He has walked 1,400 kms and had 800 kms to go to get back to Bourgogne France.

I told him our story and gave him a Canadian lapel pin. He was thankful and quite forceful in suggesting that I take the Camino Norte rather than the Camino Frances in Spain as the latter is to busy in his opinion. I thanked him and went on my way.

Georges was behind me and also had a similar chat...10 minutes later Georges caught up with me in a rage and was fuming about what "this guy" had to say.

Georges was quite offended by the suggestion of what to do in Spain. Georges is a very passionate guy...he has been in France for 60 days and clearly is very tired of all things French!

Cyrille is very pensive today as his friend for whom he is walking has been hospitalized. He is a very reflective individual and he may go home for a while in Saint Jean Pied de Port...if not earlier.

Sonia and Robert came by to see me as I was writing this in my paper blog and we had a good chat. They are leaving today after walking for a week.

We are staying in the Couvent Carmel monastery. We had a warm reception (resulted in 2 more Canadian lapel pins) and a drink. We are in double rooms...relatively tiny! Cyrille and I are sharing a room as are Georges and Yosh. Overall a very nice hebergement with demi pension at 32 euros per day.
Posted by GuyA at 15:04