Ah....today was a rest day in the historic city of Le Puy en Velay. The day has been a real treat however I have done everything I want to do so tomorrow I am setting off again on the Le Puy route or Via Podiensis to Saint-Jean-de-Port...a distance of approximately 730 kms...I really had to restrain myself from setting off this morning...more later.

Last night at the St. Francois Gite, a historic convent for nuns right by the Cathedral, I was joined for supper by a pilgrim called Ursula (may have the name wrong). Ursula was born in Whitehorse Yukon, lived and raised her family in Victoria British Columbia and now resides in London England where her husband is an engineering consultant.

She is starting tomorrow and will walk as far as she can as she appears to be constrained by a number of medical issues...not the least of which is a very sore knee...not what one needs on this walk. Ursula will be using a baggage service which takes your bag to your next destination thus alleviating some strain. I wished her a Buen Camino...hopefully she will have an enjoyable walk.

This morning I woke up with a real long list of things I needed and wanted to do. First I wanted to attend the 7:00 am pilgrims mass in the cathedral as I had heard that it was an experience not to be missed. There were probably 30 or 40 attendees of which 15 or so were pilgrims.

The service was a typical Catholic service...well maybe shorter than normal, but the real interesting part was when the priest asked pilgrims to gather around the statue of St. Jacques. We received the pilgrims blessing and each of us were asked to introduce ourselves. Most were from France however the exceptions were..two ladies from Switzerland that I mentioned in yesterday's blog, a Japanese man from Tokyo, a Canadian (moi), a tall bearded man, Georges, who had walked for 34 days from Belgium and Ulrika, from Linz Austria, the elderly pilgrim mentioned in earlier blogs.

Georges and I had a nice brief chat...Ulrika greeted me as a long lost friend. Unfortunately she had to bus the last 10 kms and is going home...this winter she is having a second knee replacement operation and hopes to be back next year. I wish her well...greatly admire her tenacity.


After the blessing and introductions we had the opportunity to pick up a wish that someone has asked a pilgrim to carry with them. I picked one out and roughly translated it was.

Prayer for the family (will not mention name) from Martinique to ensure health, faith, spirituality and professional success for her children.

We were each given a small medallion to carry with us and received a Compostela stamp (more later). The pilgrims then filed out and started their pilgrimage...it was at this point that I had to restrain myself...as an example I thought it would be neat to talk with Georges about his pilgrimage so far. He did mention to me that it had been a very solitary one to date...it would be great to meet up with him later.

I lit a candle for Pa and as similar to the previous Einselden church time I placed the candle in the far corner by itself...just like Pa would have wanted.

After the church service I proceeded to follow the Chemin St. Jacques but quickly lost it...I noticed a pilgrim or two also somewhat baffled. I thought this couldn't be possible given the importance of this route until I realized that the ballisage was composed of Camino shells embedded in the cobblestone streets. 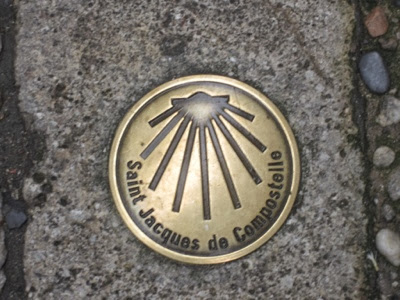 Within an hour I had completed my main chores, Euros at bank, replaced the phone charger at Orange store (lineup to get in!) and additional blister protection at a Pharmacy. The pharmacist was vey helpful..first Canadian lapel pin on the day.

After a quick visit to the Fédération Française des Associations des Chemins de Saint-Jacques-de-Compostelle (or FFACC if you prefer!) where I gave the two helpful ladies Canadian lapel pins, I headed off for the Statue of Notre-Dame which is built on a tall point of volcanic eruption many years ago. 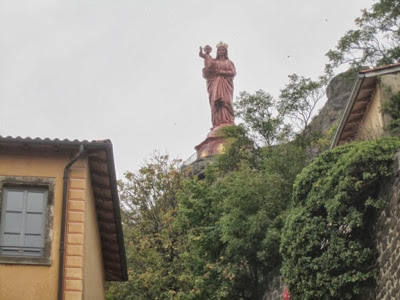 The statue was erected in 1860 using the metal of 213 cannons captured from the Russians in the Crimean War. It is 22.7 meters high and weighs 835 tones. When built it was the tallest statue in the world prior to the Statue of Liberty.

It took maybe 15 minutes to climb to the top...yes right into the statues head...the last 5 minutes on a very narrow spiral stone staircase. Then there was a metal ladder...maybe 10 feet to get to the highest point possible. Yours truly, a man at ease on ladders, managed to get about half way up before waving to the top and shimmying down. After all one can only deal with so many dangerous circumstances...remember the animals!

Next I went to the Rocher et Chapelle Saint-Michel-d'Aigilhe which is a very famous site world wide.


Again a 10 minute walk up a stone spiral staircase...clinging to the inside and I was at the chapel.

The Saint-Michel-d'Aigilhe chapel was built in 961 thanks to the bishop of Le Puy-en-Velay who had just returned from a pilgrimage to Santiago de Compostela. A stunning and almost impossible structure to conceive how it was built!

I mentioned the credential stamp received in the Cathedral earlier...pilgrims collect these stamps along the route to demonstrate they have walked the route. Once in Santiago de Compostela they will be the proof required to obtain a Compostela. The stamps are usually available where one stays and sometimes in churches and other civic locations. Some pilgrims go out of their way to collect them...I just receive when they are readily available as I don't like to simply collect things...not in my nature. Here is a page from my pilgrim credential. 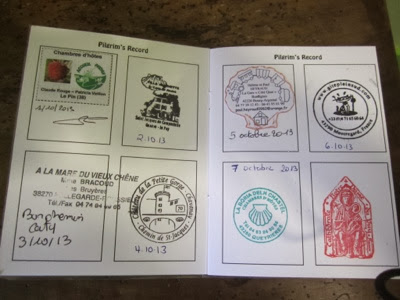 I went back to the Gite for a while and handed out my box of maple leaf Canadian cookies and a Canadian lapel pin to the lady in the administration area. The cookies were a small thank you for the Gite holding a box of resupplies that I had sent from home...YES that means more Canadian lapel pins!

I then went to see a really neat, informative and well presented Le Camino display. The display does an exceptional job of providing historical context and telling people's stories about why they completed the walk. Two more Canadian Lapel pins to the ladies who expressed an interest in my journey.

I came away realizing that the 800 kms walked so far will likely be much different than the next 730 kms in that there will be more pilgrims hence increased opportunity to interact with fellow pilgrims. I have really enjoyed the solitude of the walk so far however think I am ready for this shift.

My day closed with a super Skype date with my spouse Dawn...was great talking to you ma chère! Je t'aime!