A superb day's walk through the Haute Savoie for 31.9 kms over 7 hours. The scenery, especially in the morning, was amongst the best so far in my Camino walking. A lot happened today therefore an extra long blog as well.

First back to yesterday...after completing my blog a fellow pilgrim walked into the Gite Beaumont...just before I was to start cooking spaghetti. Anne-Marie from Bern Switzerland (remember the name for later). She quickly took charge of supper preparations...don't think she was too impressed by the fact that I put the spaghetti as is in boiling water...supposed to break it in half?

Over supper she told me her Camino story which dates back to 2007 on the Camino Frances in Spain, and then over the next few years Bern to Geneva and Le Puy en Velay to St. Jean Pied de Port...now she was walking for a week (On vacation from regular job working in a hospital as a spiritual advisor) on the Via Gebennensis from Geneva to St Cote Andre and then returning next year to complete this Camino. Quite interesting for me to hear about these other Camino's which I have yet to do. When I gave her a Canadian Lapel pin well again a Canadian connection...her son is leaving in a week and will spend some time on the west coast of Canada before heading to California.

She was travelling shorter distances than me...wished her a Buen Camino. As for most people I meet the chances of seeing Anne-Marie again are very small. I also left 3 Canadian lapel pins for the Gites owner and daughter.

Big deal you say...well I should NOT have seen this sign! I was a little bit lost so I asked a man who was walking with his young son and he pointed out where I was...seems I had walked about 1 km or more outside the route. He went to some length to explain how I could rejoin the route by going through a farmers's field, then taking a left flowed by a sharp right and standing on my head etc. I thanked him...made sure he was out of range and simply walked back where I came from and voila the missed sign!

I spent the next 15 minutes regretting that I had not spread some good Canadian cheer with a few Canadian lapel pins...forgot!

On the question of signage the Via Gebennensis is so far very well signed. A comment left by a fellow member (Kitsambler) of the Camino Forum run by Ivar Revke provided great advice. Signs are at every key road intersection however there will be long stretches where there are no signs as there are no junctions. So far I am finding this Camino easier to navigate than the Via Jacobi although a long stretch without signs can be unnerving.

A little later in the day as I was leaving Les Malpas I started down a major roadway for maybe a minute. It didn't feel right...a motorist whizzing by stuck his hand out the car window and I immediately understood that I was going the wrong way, had to go back and then uphill. Amazing sign language...he deserved a Canadian lapel pin but I couldn't run that fast.

A few pictures from walking this morning...can't do real justice for the scenery though. 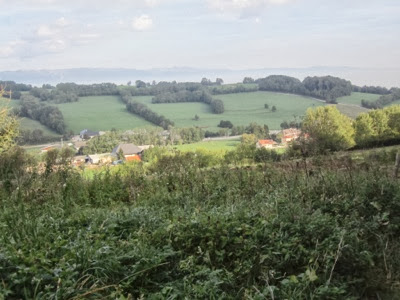 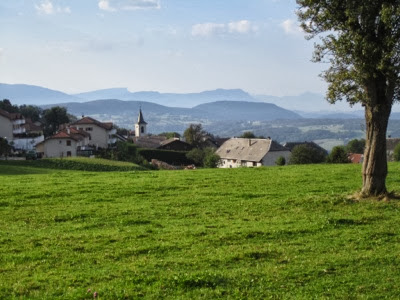 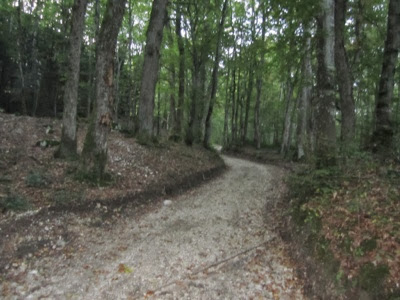 The day was a mixture of forest walking and country road walking...at some point I came across an interesting sign entering the woods...

The sign says...hunting in progress in the area from Sep to Jan on Thursdays, Saturdays and Sundays as well as holidays...PHEW today is Friday and not a holiday...I'm good!

I was unable to publish yesterday's blog entry due to poor Internet connectivity in Beaumont so as I crested a high point near the Col de Mont-Sion I had a bright idea as I stood 50 meters from a cell tower. Why not try it here...quite proud of my superb analytical skills...bingo published almost immediately.

A few kilometres from La Motte I met a lady walking her two dogs. She was quite interested in my pelerinage St. Jacques so we walked together for a half hour or so until we entered La Motte. She and her husband moved from Switzerland 30 years ago after stays in Zurich (to much focus on money), Geneva (too big and apartments too small). I learned that Switzerland has four languages...Swiss German which is spoken but is not written, German which is written but not spoken, French and Swiss Italian!

Her name...Anne-Marie originally from Bern Switzerland...go figure...same name and city origin as the earlier pilgrim! She received a Canadian lapel pin.

Dangerous animals...all quiet until I passed through La Motte! Then at least half a dozen loose barking dogs...one of them very large who really did not pay much attention to me.

One of them was barking outside some of type of workplace area...a guy in his overalls came out shouting "maudit chien!"...you can translate on your own and yelling things at the owners of the dog. Basically out of a cartoon setting...He likely does this many times each day! The funniest part was when he saw me passing he told me to "whack the dog in the head with my walking poles". Linda I did not do that.

Back to the dangerous animals...one dog was particularly aggressive and charged a few times...was ready with my pole...

I came across two more World War 1 memorials today...I know there will be a number of these however I feel I should pay homage them in a small way.

A final story...a chilling one so brace yourselves. You will recall the terrible O.J. Simpson murder trial and the reference to the black gloves found at the murder scene...they were too small. Here is what I came across while walking...I am going to reflect on whether to contact the authorities as I may be jumping to an incorrect conclusion that this is one of the famous missing gloves!

Breakfast...no picture taken or deserved...some bread, bit of cheese and a pot of jam...hardly much fuel for a long day. I had heard that essentially there would be few places to purchase food along the route today...so I left with some left over bread.

So supper rolled around at l'auberge where I am staying...and can you spell embarrassed...because that what I was big time.

The Auberge had a specialty of the house menu for 14.90 Euros...seemed reasonable considering the day I had eating. The menu was:

Here is the embarrassing part...I got up and was leaving after the first picture as I misunderstood the menu and was feeling rather full! Note I did not eat all that pâté! The auberge owner was very kind and told me nicely that I was not finished...along came the other food.

I probably ate half of what I received in total...it was delicious (other than the dessert which was a little weird...cheese in cream with sugar...tasted it and that was just fine) however I ate too much. What an interesting learning day in France when it comes to food...will certainly be asking more questions and adjusting going forward!

Stayed at the Auberge La Cave De La Ferme...had a very nice big room, with a small balcony and in room shower etc. with breakfast for 36 euros. Highly recommend it if you are looking for a bit of personal space on your walk. Reservations needed as I believe they only have two rooms to rent.